McIlroy proud of journey back to #1 with best friend Harry 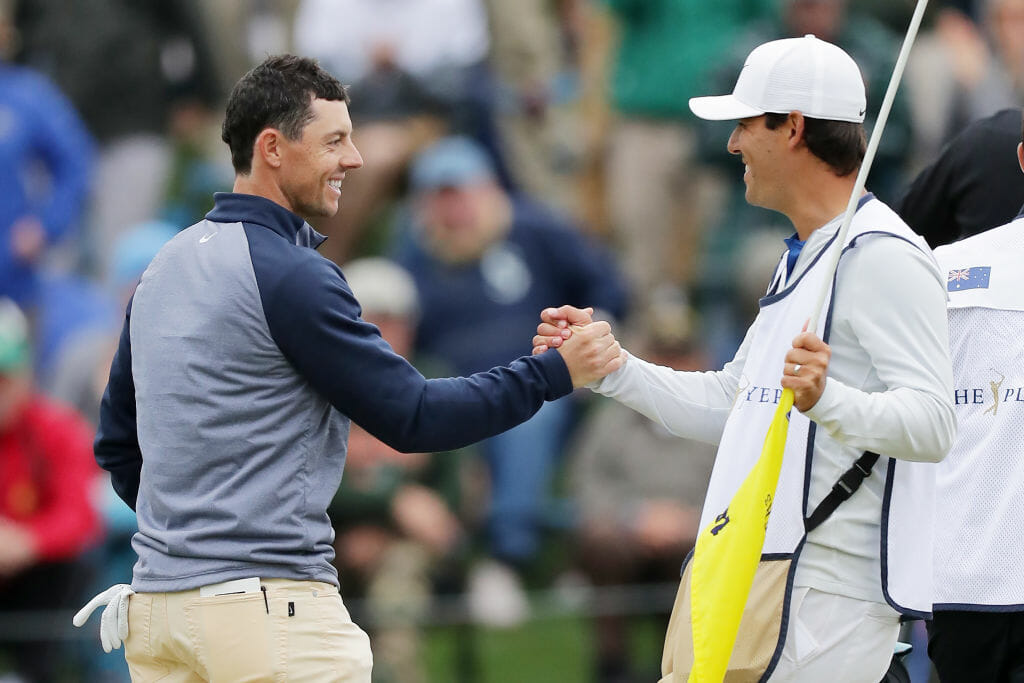 Ahead of this week’s Players defence, Rory McIlroy admits he’s proud of his efforts in reaching 100 weeks ranked atop the world golf rankings in his career but can’t quite fathom how he could possibly remain there for another 583 to match Tiger Woods’ record.

“Yeah, I’m very proud to think that I’ve spent two years of my career at the top of the World Rankings, it’s a pretty nice feeling,” said McIlroy.

“683 [weeks] or whatever it is, I can’t fathom. I mean, it’s just… it’s unbelievable. I just don’t think anyone can speak highly enough of what Tiger did over that stretch of golf. It was just insane.”

McIlroy now enters a new stage in his own stretch atop the rankings list but he admits the celebrations, though present, were muted considering he reached the summit off the back of an off week on Tour.

“The way I got to No. 1 this time was sort of anticlimactic – there wasn’t much of a fanfare,” McIlroy explained.

“I got there through a mathematical algorithm more than anything else, but I still made sure to celebrate it and celebrate the milestone. I hadn’t been in this position for over four years, so on the Sunday night of Riviera, I went out and made sure to have a couple of drinks with Harry [Diamond, caddie] and a couple of my friends.”

Indeed, such an experience is always better shared and for McIlroy to reach the top of the game of golf once more with his best friend by his side was particularly special.

“Harry took over that caddie position in the middle of 2017 and basically we’ve been on that journey together from sort of injuries and not playing my best all the way back to the top of the world.

“So it was important for me to sit down and have a few drinks with him and be like, you know, we’ve done this, this was our journey and we did it, two guys that grew up in Holywood, Northern Ireland, playing golf together, and that we’ve done this is something that was really cool.”

McIlroy goes into this week at TPC Sawgrass in similar form to last year where he ended a string of near misses when claiming golf’s so-called fifth Major.

This year he comes in off four top-5 finishes in four starts and McIlroy believes the key to winning could be found in dialling-back his approach, rather than putting the foot down as he looks to get off the mark in 2020.

“[It’s been a case of] big numbers when I find myself in those positions,” he said.

“I made the triple bogey at Riviera early on Sunday, and I made the two double bogeys on the front nine last week. Just real untimely, poor shots. Not even poor shots but just — like Riviera was very firm and if you missed it in the wrong spots, it got tricky, and I feel like that’s what happened there and that’s what happened at Bay Hill, as well.

“Especially on the par-5 sixth hole on Sunday. I hit a decent drive but didn’t hold the fairway and tried to get the ball up as close as possible to the green so I had an easier third shot with the chip, and it went into the bunker and then I had a tricky shot.

“When the courses are playing that firm and that fast, those are the tiny little margins that make the difference. Yeah, so maybe just sort of dialling it back that five percent instead of trying to play the perfect shot to hit my next from, being okay with the 80-yard shot into the par-5 or the 40-foot putt below the hole. They’re the things that make the difference, I guess.”