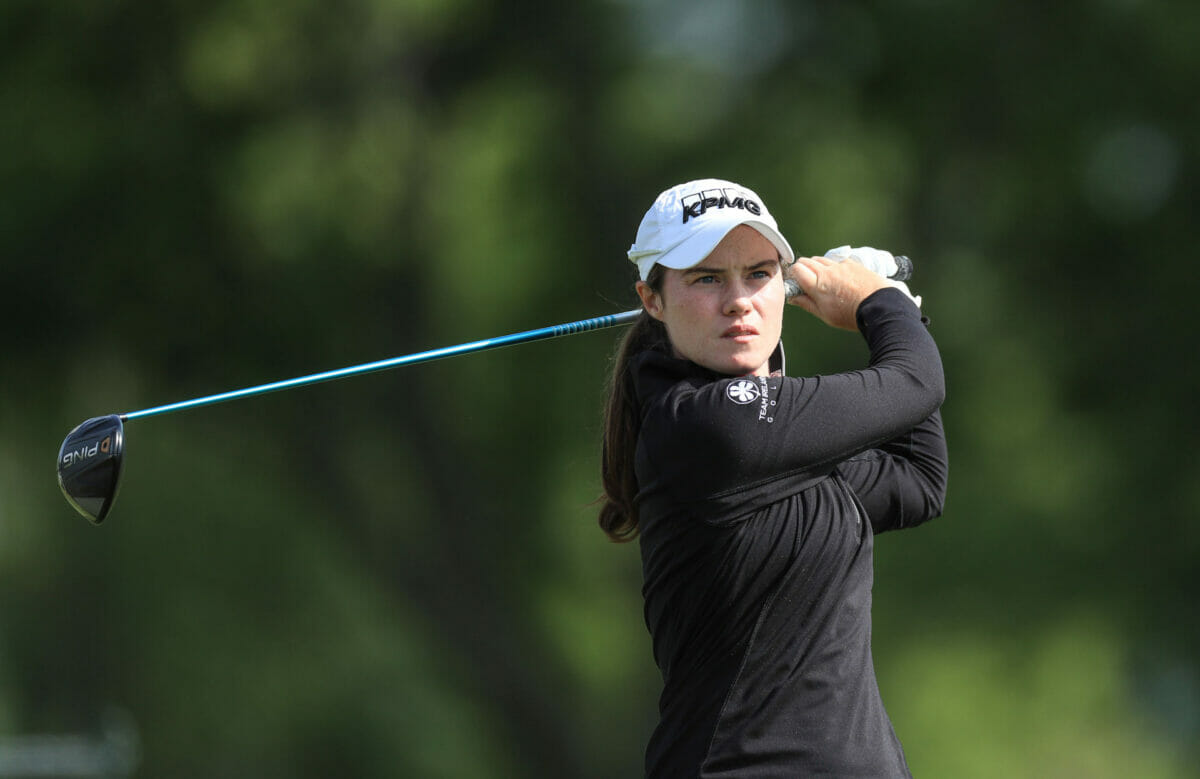 It was a tale of two nines for Leona Maguire as she recovered from a difficult outward half to keep her hopes of another strong early season finish alive at the Geoff King Motors Australian Ladies Classic at Bonville Golf Resort.

The Cavan professional seemed to leave her game behind her as she took to the course with three straight bogeys to make a giant backwards leap early in her round of moving day.

Another followed on 7 as she made the turn in 39 with no birdies but if there’s one thing we know for sure about Maguire, it’s that there’s plenty of fight in the now LPGA Tour star.

A birdie on 10 seemed to shift the balance and four more followed as the former world amateur number one raced home in 32 to transform her fortunes; signing for a one-under par 70 to move back inside the top-20 at minus-four, albeit 11 shots back of the lead.

At the top there’s a real story brewing as New South Wales amateur Stephanie Kyriacou holds a two shot lead at 15-under-par heading into the final round at Bonville.

The 19-year-old from Sydney took the lead early in the third round when she chipped in for birdie on the par-5 fourth hole, but she then double bogeyed the sixth, to hand overnight leader Lauren Stephenson from the United States the lead.

Kyriacou birdied the long seventh and then the uphill par-4 ninth to join a three-way share of the lead with Stephenson and Ayean Cho midway through the round.

Stephenson bogeyed the 11th and then the world number 35 from Korea stumbled with a double bogey on the 12th followed by bogeys on the 13th and 14th to be four shots adrift.

Stephenson and Kyriacou both birdied the par-5 14th but then the Sydney teenager made a clutch birdie on the par-5 16th to take a two stroke advantage over the American into the final day.

After rounds of 69, 63 and 69, Kyriacou has an incredible chance to win the tournament, which would give her the opportunity to take up a winner’s category of membership on the LET.

The teenager is playing in the tournament for the third time, having made the cut on both of her previous two starts, and said: “I think this week is the first time I’ve shot under par on this course. I was pretty confident coming into the tournament. I didn’t have any hopes of being in contention, but I thought that my game was there.”

Kyriacou said that she had trouble sleeping the night before after her Friday 63 and had a dream that she had forgotten to mark her ball on the green.

She admitted to feeling butterflies and said: “When a few more people came out to watch I was a bit scared, especially over my last putt which was only two foot, but I was very nervous. I don’t think I’ve ever been in contention for a pro tournament, especially going into the last round, so it’s pretty cool.”

Stephenson had her chances but missed two putts from inside three feet on a day when her putter turned cool.

After signing for a 73, the 22-year-old from South Carolina said: “Yesterday I made so many putts and today I hit a lot of good shots but I just was not making the putts and on the back nine I got a bit shaky with some of the putts I had. I gave myself a lot of chances, but they didn’t go in.”

On playing for her first professional title, the second-year LPGA Tour player said: “I feel like this week has been such a huge week for me and a learning experience. As a pro, I haven’t been in this position. I felt happy with how I handled myself today and I didn’t get upset or let anything bother me. I just want to enjoy the experience and whatever the outcome is, this is a great learning experience for me. You need to put yourself in contention as many times as you can to learn from it, so I’ll just have fun tomorrow.”

Cho sits in third on 12-under-par and Scotland’s Gemma Dryburgh compiled a 67 to get into fourth on 11-under-par.

She said: “I’m very happy. I birdied the last three holes and played really solid. I bogeyed the first, like I did yesterday, so I was happy to get it back and have an even first nine and then I went for it on the back nine. I think I’ve got a chance being four back, so I’ll do my best and see what it adds up to at the end.”

Anne van Dam climbed into fifth place with a 68, while 16-year-old rookie Pia Babnik, who is making her professional debut, climbed into a tie for sixth alongside Lina Boqvist at nine-under, to sit six strokes back from the leading pack.