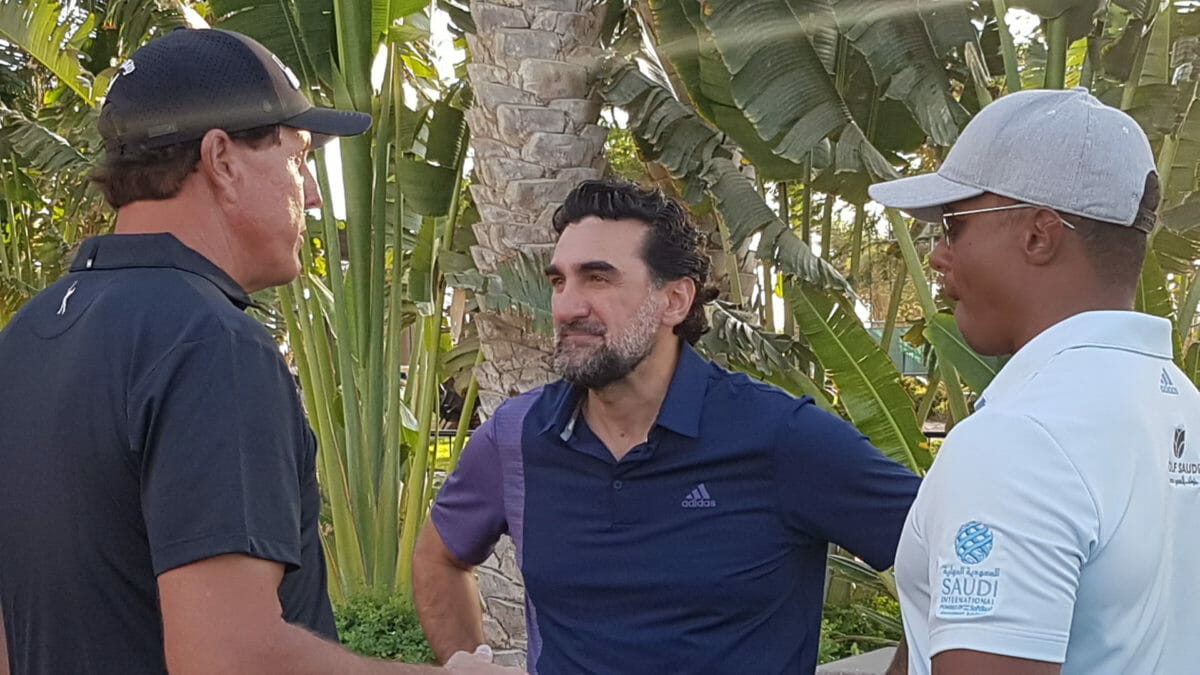 Phil Mickelson in discussion with Majed Al Sorour, CEO of the Saudi Golf Federation (right in photo) who introduced the five-time Major winner to His Excellency Yasir Al-Rumayyan, Governor of the Public Investment Fund, the sovereign wealth fund of the Kingdom of Saudi Arabia (Exclusive photo @tourmiss)

There seems to be another motivating factor behind Phil Mickelson accepting an ultra-lucrative appearance fee to tee-up at this week’s Saudi International than simply playing golf.

And there’s more to the fact the five-time Major Champion contested Wednesday’s Pro-Am in the company of a pair of heavyweight money brokers and the CEO of Saudi Arabia golf.

Mickelson was firstly all buddy, buddy on the first tee with current World No. 1 Brooks Koepka who was to be teeing-up also from the first but in the group behind Mickelson.

Then after teeing-off, Mickelson had some five hours in the company of three amateurs who are understood to be at the heart of Saudi Arabia-backed proposed Premier Golf League that already seems to have the mainstream tours such as the PGA Tour and European Tour on the back foot.

Teeing-up in Mickelson’s company was American Colin Neville – a sports consultant and partner in The Raine Group, which helped broker David Beckham’s purchase of an MLS football franchise.

Neville is a Yale University graduate and led Raine’s sports division which oversaw the $4billion (£3.07bn) sale of the Ultimate Fighting Championship and helped Manchester City sell a 13-per-cent stake in the club to a group of Chinese investors at a $3bn (£2.31bn) valuation.

Andrew Gardiner is a well-established and well-known London financier, a director at Barclays Capital and former executive at Lehman Brothers.

The third member of Mickelson’s pro-am group just happened to be Majed Al Surour, CEO of the Saudi Golf Federation.

There was a fourth that walked with the group with a first name Richard but we were unable to establish his surname.

It was all very friendly as they tackled the Royal Greens course; Mickelson ever-courteous in offering the benefit of his near 30-years experience on the Tour.

Mickelson ended his round and attended a pre-arranged meeting with the media on the lawn at the back of the clubhouse but no sooner was he asked a first question that the interview session was interrupted with Mickelson then meeting Surour who introduced him to Yasir Al-Rumayyan.

Al-Rumayyan is Governor of the Public Investment Fund, the sovereign wealth fund of the Kingdom of Saudi Arabia, and the Chairman of Saudi Aramco. He also sits on the boards of the transportation network company Uber Technologies Inc. and the Japanese multinational SoftBank Group.

Softbank is one of the main sponsors of this week’s Saudi International.

Incidentally, Al-Surour was spotted in attendance at last December’s Hero World Challenge in the Bahamas where he was observed in discussion with Mark Steinberg, long-time manager to Tiger Woods.

After the meeting was over, Mickelson was asked about his Pro-am playing partners and did not hide the fact they are behind the Premier Golf League.

“I had the chance to spend time with, and play with, the gentlemen in charge of trying to start a new Premier League,” said Mickelson.

“It was fascinating to talk with them and ask some questions and see what their plans are. Where they started, how they started and I just got their background, which was very interesting.

“I haven’t had the chance to put it all together and think about what I want to say about it publicly, but it was an informative day for me to have the chance to spend time with them.

“Three of them played, one of them didn’t, but these are the gentlemen behind it all”.

Mickelson was also asked if he had read the email sent to all PGA Tour members by Commissioner Jay Monahan and also how this proposed Premier Golf League will be different to the proposal of a ‘World Golf Championship’ series of events thought-up in late 1994 by then World No. 1 Greg Norman.

“I’ve read some of the email but I don’t feel comfortable talking about my opinions of it and the details yet,” said Mickelson.

“But I asked a lot of questions today and got a lot of interesting input so I’ll probably have an opinion soon, but not one that I want to voice publicly right now.

“And as for 25 years ago, I don’t remember it being really tangible, it was more like a concept. This seems a lot more than a concept.”