The Seven Deadly Sins that cast golfers into outer darkness 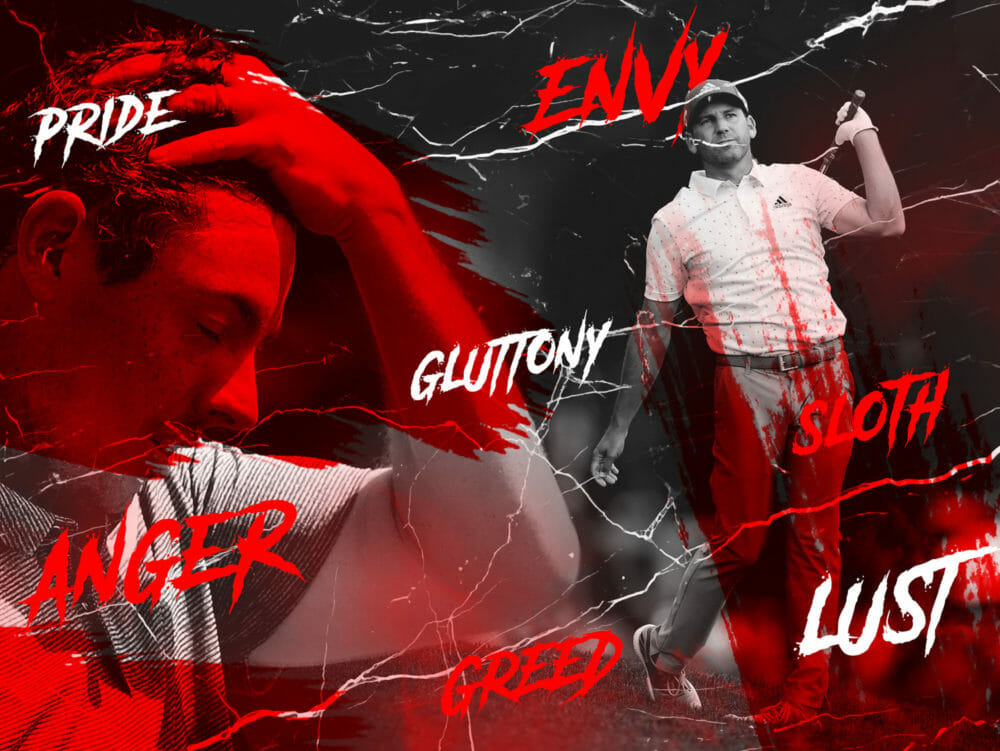 So you’re out on the course for four to five hours playing 18 holes of golf.

The actual golf swing takes less than two seconds from start to finish. By any reasonable estimation, it should not take longer than the 40 seconds allowed by the Tours for a player to arrive at his or her ball, assess the shot, choose a club, take a practice swing or two and actually hit the ball.

Of course we have all seen players – professionals and amateurs – who take much longer than that to go through the process, but worst case, it should not take any more than a minute to get the job done. Allow 100 shots for the average hacker, and that’s 100 minutes of actual golf activity, which is 1 hour 40 minutes. That leaves us with another full three hours or more of ‘not golfing’, so what’s happening during all that free time?

Chances are, that on a bad-to-medium day, the golfer experiences a roller-coaster of emotions as he or she walks between shots. A feverish mixture of anxiety, dread, tension, confusion, relief, happiness, maybe even joy at striking a beautiful shot, all this is churning along at various levels of consciousness.

The cause? Well, verily, thou mayest be suffering from some or all of the Seven Deadly Sins as they apply to the game of golf. We’re not talking here about technical issues, but rather the mental and emotional approach that can make or break a round.

PRIDE: Renowned coach Fred Shoemaker in his excellent book “Extraordinary Golf” says that most golfers come to the first tee uncommitted to anything except looking good and not being embarrassed.

Thus, the ego is in control from the start in that case, and at its most basic, pride shows up in thinking you’re better than you are. Not for you the careful lay-up shot, or leaving the driver in the bag on a narrow fairway with danger left and right. Bash on regardless and blame your O.B or lost ball on anyone and anything rather than your own arrogant refusal to accept your limitations. Other manifestations of Pride:

Believing you hit it 250 yards with the Big Dawg when really you struggle to hit the ball 150-170 off the tee, should you even manage to hit it relatively straight.

Heading for a horrendous score that would be embarrassing, so you N.R even though the handicap system requires all scores, good, bad and indifferent, to be returned in competition. “Nobody is going to see how bad I played today,” is the underlying thought in this situation.

Facing a 220–yard carry to a well-protected green in the distance, and “going for it” because you believe only wimps lay–up. And repeating the dose time after time despite consistent failure round after round.

Going to a pro for a lesson and insisting on telling him exactly what you believe is the answer to your problems instead of listening to his analysis and remedy for your swing issues.

Believing you know so much about the golf swing that you can take a novice golfer to the Range and give him or her lessons when you play off a high handicap yourself.

GREED: Desiring the game or swing that the other guy or woman has. Wanting the success he or she enjoys, but without any inclination to put in the work that brought the success.

LUST: Yes, that could apply to the Mixed Foursomes partner who is not one’s life partner or husband or wife. Could also be relevant to greed for prizes at any cost, and at its worst, result in cheating in order to win. For reference, check out Rick Reilly’s book “Commander in Cheat” to discover Mr Trump’s approach to the game.

ANGER: Where do we start with this one? The surge of rage that rises from the toes and flares through the stomach and into all parts of the body because the effing ball has effing gone into the effing cabbage again! Nobody is immune to this ‘Sin.’ Ask Sergio Garcia how it felt when he allegedly took lumps out of the hallowed turf in Saudi Arabia in February 2019 if he is familiar with the toxic energy of Anger.

Rory McIlroy famously hurled a 3-iron into a lake at Doral after a duffed shot, and recently Eddie Pepperell just kept hitting balls into water at the Turkish Airlines Open until he was out of ammo and could not play on. He got disqualified for that episode. Fred Shoemaker has said that any golfer at any time is only “two shots away from crazy.” How true.

GLUTTONY: Could relate to the aprés-golf food and drink indulgence. Could also manifest in the unbridled chase for prizes at all costs. Also might show up in prioritising playing lots of golf at the expense of work or home obligations.

ENVY: Jealous of another’s success and wanting to tear them down through clubhouse gossip and negativity about their personality, their demeanour, the way they behave on the course, all because they’re a better golfer and win more competitions than you.

SLOTH: Also known as procrastination. This one can show up in so many ways for the golfer. For example, a refusal to go and do a bit of practice at the Driving Range, or to take a lesson when it’s obviously needed. On the course, too lazy to maybe assess a shot properly or to consider the best club option, or to go look for a ball that might be found without too much difficulty.

Dawdling along between shots with no thought for pace of play or how that can affect other people on the course. Or, horror of horrors, being too lazy to actually get out and play the game!

Salvation beckons, first and foremost through awareness of those negative characteristics and a desire to amend the relevant behavioural faults.

Is that a halo I see over your head???