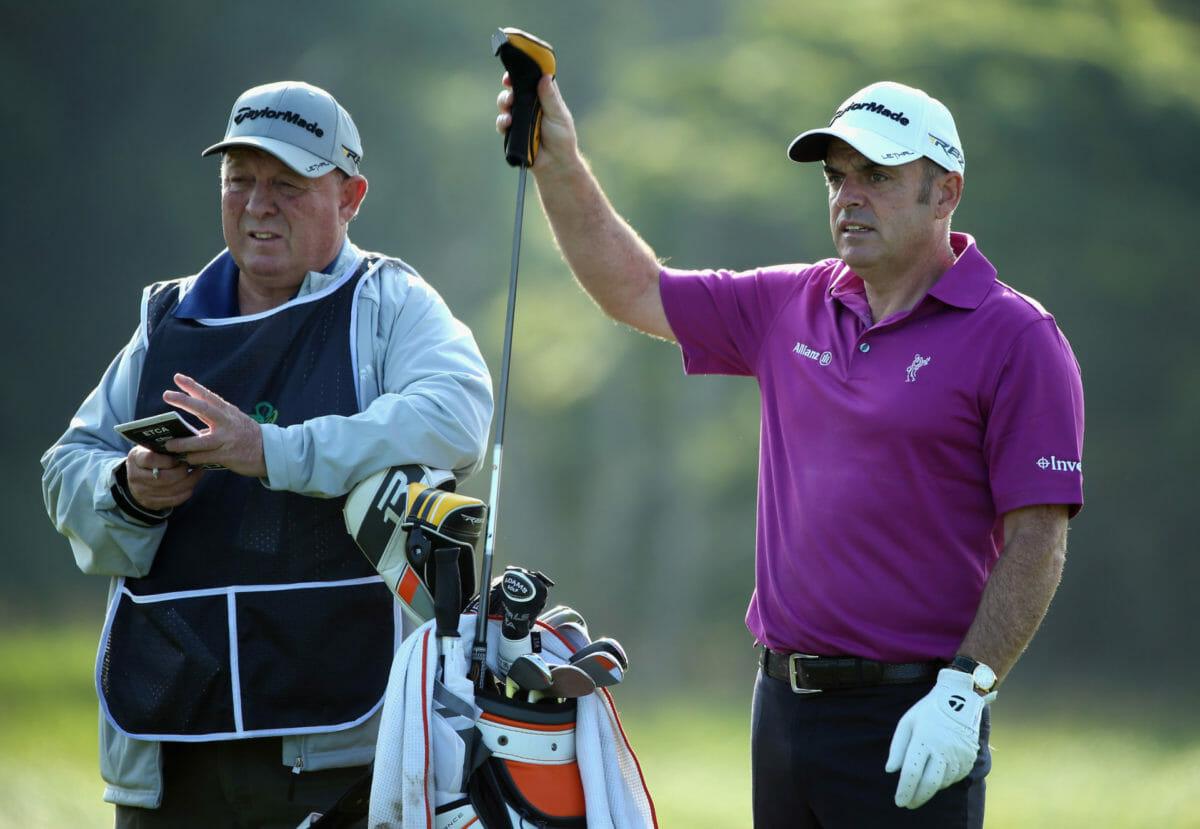 Paul McGinley with his caddie "Edinburgh Jimmy" Rae during the pro-am event prior to the start of the Irish Open at Carton House Golf Club on June 26, 2013. (Photo by Andrew Redington/Getty Images)

The New Year and a new decade is just a few days old and the golf world is already mourning the passing of ‘Edinburgh’ Jimmy Rae, the former long-time caddie to 2014 victorious Ryder Cup Captain Paul McGinley.
Rae passed away on Thursday (January 2nd) aged 66.
The Scottish-born bagman caddied for a number of players including not only McGinley but the likes of Ian Poulter, fellow Scot Andrew Oldcorn and Ireland’s Damien McGrane.
Jimmy, from Tranent near Musselburgh, was not your normal caddie, and not only because he sported a Scottish accent that most living outside the ‘Home of Golf’ nation found very difficult to understand.
I travelled in his company often and Jimmy, along with the likes of Dave Renwick, Pete Coleman and David Musgrove, made the long European train journeys between tournament stops such a fantastic experience.
And Jimmy was equally pleasant and obliging with most members of the golfing media.
Jimmy was one of an ever-depleting band of ‘ole school’ caddies. He knew his job inside out and outside in and never took a backward step even if it met incurring McGinley’s wrath with his forwardness and bluntness.
Though at the end of a round the pair remained the best of friends so much so that one of McGinley’s first ‘picks’ for his 2014 European Ryder Cup backroom team was Rae.
“Very sad news to start the new year in that my longtime friend and caddy Edinburgh Jimmy passed away today – I’m so sad and will miss him terribly,” said McGinley on Twitter.
Poulter also took to Twitter saying:  “Such a sad start to 2020. One of European Tour’s characters. Heavy Head as he always called me. James Rae (Edinburgh Jimmy) has passed away. What a gentle giant. His bark was louder than his bite. One of the kindest caddy’s I have ever met #RIP  You will be missed.”
Fellow Scot Stephen Gallacher, who would travel often in Jimmy’s company, also spoke of his sadness.
“So sad to hear,” said Gallacher.  “I was with him in London mid-December.”
And Jimmy’s fondness was not just limited to Scotland with PGA-winning American Shaun Micheel sharing his sadness.
“I loved being around him even though I only understood about half of what he said,” said the American. “Made me want to spend more time with him.”

Edinburgh man Andrew Oldcorn, a three-time European Tour winner, said of Rae: “They broke the mould with Jimmy. Always had me in stitches.”

And past Scottish Seniors Open champion Paul Eales added: “What a part of the European Tour family he was. Will miss his banter and laugh.”
RIP – Jimmy.