Costa Daurada – A Golden Experience on the Golden Coast 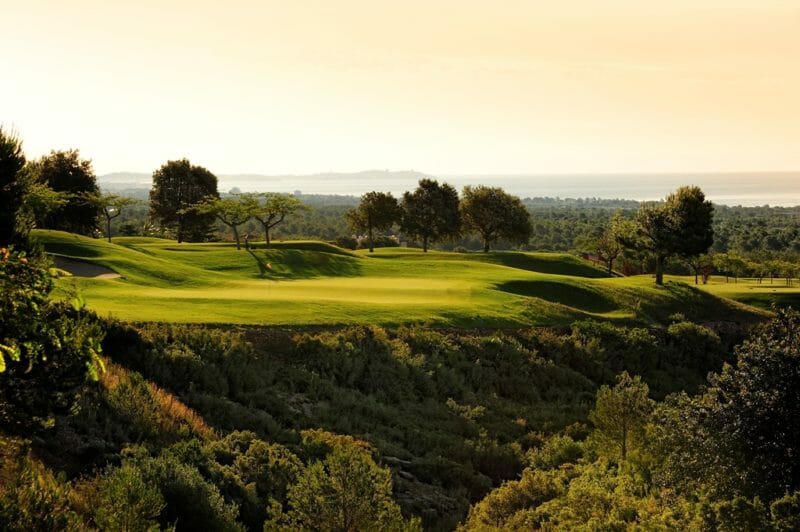 When it comes to golf trips abroad, the Iberian Peninsula has long been the preferred choice of Irish golf and travel aficionados. Boasting a rich culture whose Roman heritage gave way to Visigoth, Saracen and ultimately, Christian rule, to its benefit, Europe’s south-western frontier bears the hallmarks of each successive ruler to this day. Their footprint can be seen in the cuisine, the architecture and the lifestyle – all of which offer a vast departure from the everyday for British and Irish visitors.

For sun-seekers and fairway-finders alike, the Algarve and the Costa Del Sol are the best known and most popular destinations, but much like the region’s multi-layered history, it’s what is beyond the obvious that really sets the Iberian Peninsula apart.

One such region is Costa Daurada. Lying south-west of Barcelona, Costa Daurada is situated along the Mediterranean Coast, in the province of Tarragona, and forms the southern-most tip of Catalonia. A temperate climate makes for ideal golfing country, with average daytime temperatures topping 20 degrees for seven months of the year and mountainous regions north and south offering protection from Atlantic storms sweeping across Northern Spain.

The region’s golf is provided by six clubs, three of which I visited on a recent trip, and each of which offered a different challenge and a different experience for the various level of golfers in our party.

Costa Dorada Golf Club is the oldest course in the region, and offers a picturesque adventure through the Catalan countryside, blending elevated tee shots and doglegs with just enough water to grab your attention. Costa Dorada’s fairways are lined with palm, willow, olive and pine trees, and offers panoramic views of the surrounding hillside and the sea.

As a challenge, Costa Dorada is very playable for golfers of all levels, and presents a route that alternates short strategic holes and those that require a little more power. The par-five 13th hole measures 637 yards for those adventurous enough to play off the back sticks and is one of the longest holes to be found anywhere in Spain.

The 19th hole is a traditional Catalan country house and specialises in local delicacies and wines. It is the perfect place to relax and unwind after your exertions on course. You can even watch some locals engaging in a game of Padel – a hybrid form of tennis that originated in Latin America and whose popularity has exploded in Spain.

Club de Golf Bonmont is the region’s second oldest golf club and they are currently putting the finishing touches to a five-star Westin Hotel and Spa resort to complement the golf course. Designed by leading architect Robert Trent Jones Jr, Bonmont naturally blends stunning mountain and sea views and a golf course that utilises its natural contours to the fullest and demands its fair share of attention.

Reasonably forgiving off the tee, this course really comes to life as a second shot challenge. Deep ravines lurk for wayward approaches on several holes, and the proximity to the Mediterranean Sea means a stiff breeze can be expected to add a little extra havoc.

The highlight of the round is the par-5 17th which is risk/reward personified. The most adventurous and accurate of tee shots can leave a mid to short iron into a heavily sloped and chasm surrounded green, but anything slightly off target means an almost certain reload. Threes and fours are possible, but sevens and eights are equally likely.

Lumine Golf Club provided the final leg of the trip and was my personal favourite. With its doors opening in 2008, Lumine is the most recently developed golf club in the region and boasts two 18-hole complexes and a nine-hole course.

The Greg Norman designed Lakes Course is aptly named with water coming into play on 13 of the 18 holes and vast bunkering likely to claim anything between the short grass and the hazard. Though better suited to lower handicapped players, there are sufficient bail-out areas for the less adventurous and few necessary long carries meaning that high handicapped players are able to compete as well. In addition to this, the relatively flat layout is favourable to many players who prefer to carry their bag and a gentle stroll for those who favour a push cart.

A relatively inauspicious opening nine explodes after the turn with four consecutive par-fours, the last of which is driveable for longer hitters unperturbed by a watery grave for anything slightly left. The dog-leg par-five finishing hole in front of the picturesque clubhouse provides the perfect amphitheatre for a grandstand finish.

Whilst the Hills Course designer Alfonso Vidaor may not match Greg Norman in terms of profile, his design is more than a match for the Great White Shark’s layout. Situated high above the Lakes Course, weaving through pine forests, through natural quarries and rocky ledges, before opening up to reveal breath-taking views of the Mediterranean Sea, the Hills course is one of the most enjoyable layouts I’ve had the privilege to navigate.

The par-three eighth is the highlight of the opening nine, with water to carry, heavy bunkering and a shallow green combining to make a well-deserved index one. The second nine is the more spectacular, with the closing two holes the high pint of the round. Deep rock faces provide the backdrop for approach shots on both with the 18th tempting longer hitters to cut the dogleg at the risk of finding the water to the left of the green.

The Hills course is served by a separate clubhouse with a veranda overlooking the final green and towering views over the surrounding hills and coastline.

Golf at Lumine is completed by the nine-hole Ruins Course. Again, Norman designed to the backdrop of Olive and Carab trees, the Ruins Course takes you on a sweeping curve around ancient Roman archaeological remains that can still be seen today.

Lumine’s Hills and Lakes Courses have played host to the final stage of European Tour Qualifying School since 2017 and will likely host a Challenge Tour event in the not too distant future.

Away from the golf course, Tarragona, the region’s capital, is a must visit. Once one of the most important cities in the Roman Empire, and though the city has changed hands multiple times since then, there are reminders of the city’s former life to be seen everywhere, from the city walls, to the extremely well-preserved amphitheatre.

Just outside Tarragona is the Pont de les Ferreres aqueduct. Another relic from Roman times, the aqueduct (one of the best preserved in the entire empire) continued to supply water to the city of Tarragona for more than 1,000 years after the fall of the Roman Empire.

Of the nearby towns, Cambrils and Salou offer the best opportunities for accommodation. Cambrils, the quieter of the two, is a small fishing town with a healthy restaurant scene along the seafront. For seafood lovers, much of the cuisine on offer is freshly caught that morning, but there is a healthy alternative for carnivores and herbivores alike.

Salou is a much more vibrant option, where festivities carry on into the small hours and beyond. Again, there is no shortage of quality restaurants serving local specialities, fine wines and local beer. True golf nuts can even dine at Castillo de Javier, owned by father of former Solheim Cup star Beatriz Recari and check out some of the various golfing memorabilia which adorns the wall.

So, if you’re planning your next golf trip abroad and you haven’t tried out Spain’s golden coast, then give it a try. I promise you won’t be disappointed.