Harrington heads the Irish charge with bittersweet 69 at Dunhill 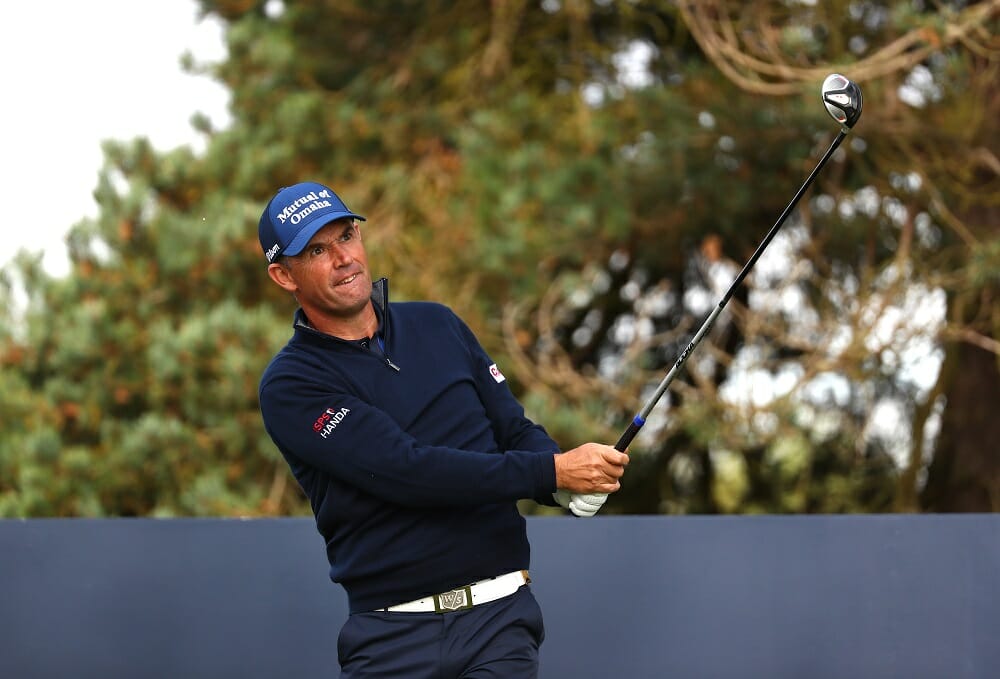 The three-time Major champion leads the five-man Irish contingent but took most of the gloss off his round in finishing bogey, bogey in a three-under par 69 also at Carnoustie.

Harrington, starting from the 10th, capped his round very early when he raced to four-under par in taking birdie at 11, eagling the par-5 12th and then posting birdie at the 14th.

He dropped a shot on his ninth, the notorious 18th, but then moved to five-under with birdies at his 14th and 15th holes only for the 2007 Carnoustie Open winner to bogey his closing two for a bittersweet 69.

McIlroy meanwhile wasn’t wholly content either after hitting ‘OB’ during his opening round at Carnoustie.

The four-time Major champion was three-under par playing the famed ‘Hogan’s Alley’ par-4 sixth hole, the 15th hole of his round, when his drive only narrowly cleared the ‘out-of-bounds’ fence positioned all the way down the left-side of the hole.

The World No. 2 had to reload in taking an eventual triple-bogey ‘7’ on route to a two-under par 70.

McIlroy teed-up with a decent record at Carnoustie having won the ‘Low Amateur’ medal at the 2007 Open Championship and was joint runner-up at last year’s Open.

But then the hardest of this week’s three host venues holds no favours.

“I felt like I played okay and I could have made a few more birdies but to then take a ‘7’ on the 6th hole was not ideal,” he said.

“I hit my tee shot just a little bit left and the wind took it out-of-bounds.

“In saying that, it was nice to birdie the last though my dad actually bettered me by five shots but thanks to the birdie it actually turned out to be a decent day.”

McIlroy’s score of 70 matched the pair of 70s he had over the weekend in the 2018 Open, the last occasion he played Carnoustie with the Holywood golfing star seeming a little indifferent over a ‘new look’ Angus layout.

“Carnoustie is now so different, even teeing off the 10th hole this morning. At The Open we’re worried about driver going into the burn, and today, you’re trying to hit driver as far up as possible so you can get an 8- or a 9-iron in your hand,” he said.

“It’s played different. I think Carnoustie over the years has gotten a little easier. They have taken a lot of the gorse bushes out where you really had to think about some tee shots, even when I first started to play here.

“Now, with trying to accommodate a lot of spectators with The Open Championship, they have taken a lot of the gorse out, which makes a lot of the tee shots easier, and I think that’s probably why you’re seeing a few lower scores around Carnoustie than you’re used to seeing.”

Struggling Paul Dunne signed for a two-under par 70 at Kingsbarns Links while Graeme McDowell fought back from being two-over par through eight holes to birdie his 13th and 14th holes in a level par 72 at Carnoustie.

And Carnoustie also handed Open Champion, Shane Lowry little favour with the Clara golfer posting a one-over par 73 that including three bogeys and one less birdie.

Fourteen months ago at the 147th Open, Lowry was at one of the low points in his career parting with long-time caddy, Dermot Byrne after a first day 74 and then turning to coach, Neil Manchip to go out to post a second day 73 before eventually missing the cut. What a difference a year makes for the Clara man.

Justin Walters found his form in spectacular style at St Andrews to take a one shot lead after an emotional first day in Scotland.

The South African has faced plenty of adversity on the golf course during the 2019 Race to Dubai, battling a calf injury over the summer and failing to register a top 20 in 23 starts on the European Tour.

The 38-year-old also sadly lost his father this year but revealed after carding a stunning 63 around the Old Course that he felt his presence as he fired his lowest round on the European Tour for six years at the Home of Golf.

“I haven’t shot anything under 69 or 68 in a long time,” he said. “To do it here at St. Andrews, and the emotions I’ve been through the last few months, it’s just so special.

“I’ve been swinging really well all year mostly, from about U.S. Open when I qualified, and I got to The Irish Open and tore my calf really badly. Really struggled to get right again for a while, and I finally got over that, and then I lost my dad.

“It was quite hard. I just kind of decided not to feel sorry for myself, really, and kind of dust myself off and coming in here, it has a healing quality. I don’t know, it’s hard to describe. I was here with my dad when we lost Mum, and just thought I was back with him.”

Fox, Smith and Perez joined Walters at St Andrews, while Otaegui carded his 64 at Kingsbarns. England’s Matthew Southgate recorded the lowest round of the day at Carnoustie with a 65 to sit at seven under par alongside his countryman Paul Waring, home favourite Richie Ramsay, South African Jaco Ahlers, Finn Tapio Pulkkanen and Norway’s Kristoffer Reitan.