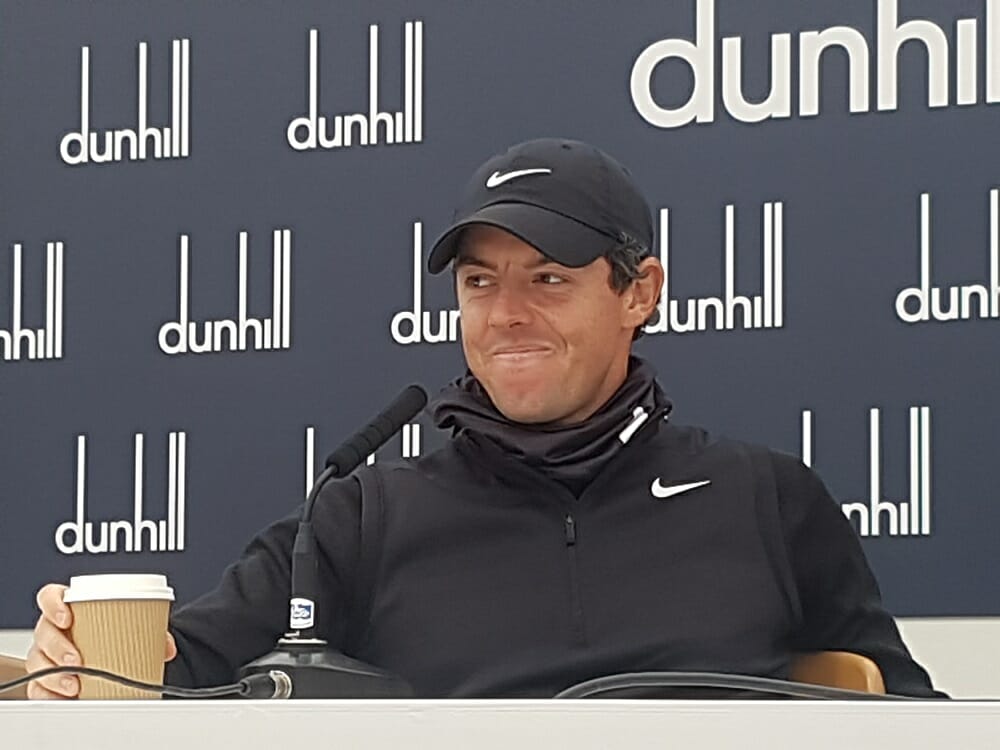 Rory McIlroy is hoping to have two reasons to celebrate at this week’s Alfred Dunhill Links Championship – a first victory toast in Scotland and celebrating his father’s 60th birthday.

The World No. 2 ranked McIlroy heads a field boasting three of the world’s top-five players including victorious 2018 Ryder Cup team-mates Justin Rose, at No. 4 and Spaniard Jon Rahm at No. 5.

McIlroy had asked his father, Gerry how he would like to celebrate his upcoming 60th and the now Chairman of the Rory McIlroy Foundation had just one answer.

The four-time Major winner spoke of his early memories playing alongside his father at his still beloved Holywood Golf Club in suburban Belfast.

“My earliest memories are even going back to when I was four or five and wanting to play 18 holes with him, and he said, are you sure as it’s a long time out here and you’re going to get tired,” said McIlroy smiling.

“And I’d get through nine holes, and then I remember the 10th hole at Holywood, as it’s a par 3 straight up the hill, and I’d get halfway up the hill with my bag and he’d take my bag off me and put it on his bag and he would carry the two bags up the hill.

“We have so many great memories on the golf course. I think I do remember the first time I beat him, and it was a bit of a weird feeling.

“Almost like a guilty feeling. Like I don’t really want to beat him, but it’s one of those things. We still have good matches and obviously I have to give him a few shots now, but when we play, as I said, it’s like when I was growing up.

“Probably between the ages of like 12 and 18, he didn’t play a lot of golf at all because I started to play a lot and he had to take me around and look after me.

“But after that, he’s really got back into it again, and you know, my mum and dad spend seven months a year in Florida. He’s now a member at Seminole and any time he invites me over, we always have great matches and we play with a lot of different people and you know, some father and son things, as well.

“So, I really appreciate the times that I get to spend with him on the course because I know growing up, we didn’t have as many because he was looking after me, and now that I’m in a position that I’m in, we can spend a lot more time together, which is nice.”

McIlroy is not the only ‘father-and-son’ combination contesting this week’s Euro4.5m tournament over the regular three host courses of the Old Course at St. Andrews, Carnoustie and Kingsbarn Links.

They include Rahm and his father, Edorta who took-up golf after attending the 1999 Ryder Cup at Valderrama when his son was aged just three.

“My dad used to do parasailing, rock climbing and very exciting stuff compared to golf but then one of his good friends, some of the guys were down in that area when the Ryder Cup was going on,” said Rahm.

“When they came back, they said, hey, let’s try this. I was 3 at the time. I had not turned 3 when they started playing golf. I think my dad started shortly after when he came here for the first time.

“I do have a picture of me as a 4-year-old putting on the putting green they have over there by the clubhouse now. That’s how it started because of that 1999 Ryder Cup. I’ve got to say thank you for that.”