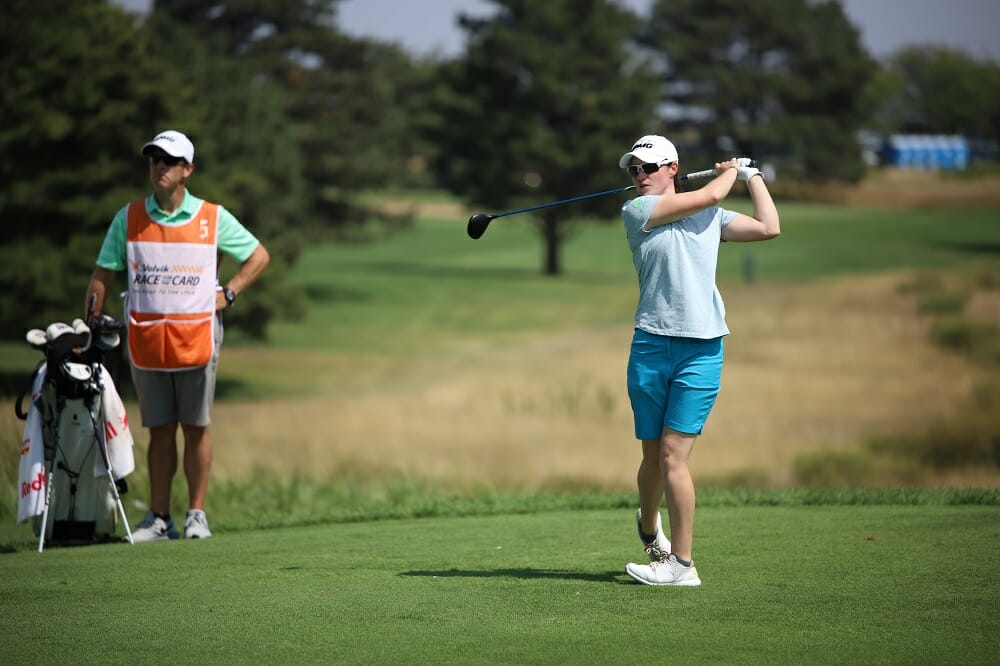 Leona Maguire in action during the first round of the Garden City Charity Classic. Image courtesy of the Symetra Tour

Leona Maguire traded one birdie with one bogey and 16 pars to return an even-par effort on day one of the Garden City Charity Classic.

The Cavan professional is looking to rediscover her early season Symetra Tour form and sits in a share of 37th heading into round two this evening after a solid display at Buffalo Dunes Golf Course.

If anything, Maguire will look to convert more chances on moving day after needing 33 putts to get home in Friday’s first round.

Currently in 5th place on the Volvik Race for the Card standings, Maguire now enjoys a $20,000 cushion as she remains on track to finish inside the top-10 on the money-list and thus earn her LPGA playing right for next season.

Still, the former world amateur number one will want to leave nothing to chance as she resumes her tournament this evening at 19.24pm.

At the top, seven birdies from Alejandra Llaneza (Mexico City, Mexico) in the first round led to a 5-under par 67 and the 18-hole advantage in Kansas.

Highlights included a bogey-free, 4-under par 32 going out with three straight birdies coming in to cap the day one performance. The mark also ties a season-best score to par, which Llaneza set in the final round of the Island Resort Championship.

“A lot of things were going right, one of those days where I stayed calm and patient,” said Llaneza, who has missed out on the weekend in eight of her last nine starts.

“I had good feels with my long swing and the putter, luckily able to keep it going on the front nine. Happy to end with three birdies and definitely gives me confidence. It was important to shoot a good number today. The wind died down on the back nine which was surprising, but a good surprise. Hopefully I can do the same tomorrow.”