Honours even ahead of afternoon singles matches at Walker Cup 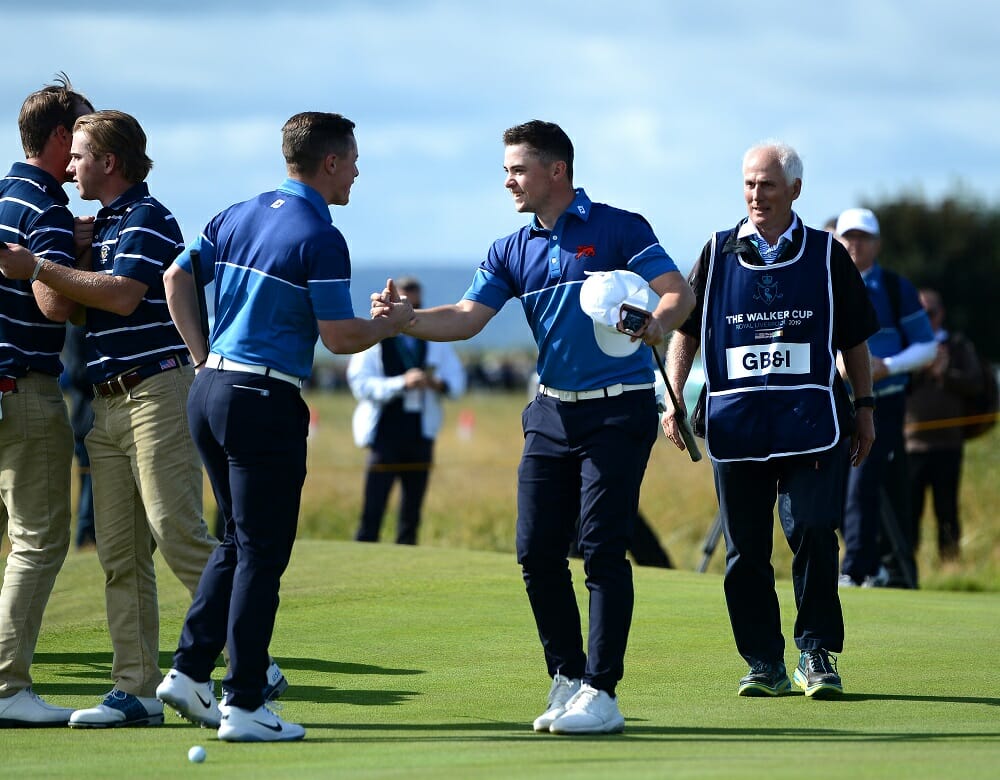 HOYLAKE, ENGLAND - SEPTEMBER 07: Alex Fitzpatrick of Great Britain and Ireland celebrates victory with teammate Conor Purcell on the seventeenth green in the foursome matches during Day 1 of the Walker Cup at Royal Liverpool Golf Club on September 07, 2019 in Hoylake, England. (Photo by Richard Martin-Roberts/R&A/R&A via Getty Images)

Portmarnock’s Conor Purcell made a winning start as the 47th Walker Cup Match teed off at Royal Liverpool this morning.

Alongside Hallamshire’s Alex Fitzpatrick, the younger brother of European Tour star Matt, the pair ground down John Augenstein and Andy Ogletree to draw first blood for Great Britain and Ireland with a 2&1 against their United States counterparts at Hoylake.

Purcell was the only Irishman competing this morning as Dundalk’s Caolan Rafferty and Mallow’s Amateur Champion, James Sugrue sat out the morning session.

With four foursomes match-ups in play on the Liverpool links this morning, the scoring zig-zagged after GB&I’s opening win. Sandy Scott and Euan Walker were defeated 2&1 in another tight match against John Pak and Isaiah Salinda.

GB&I regained their one point advantage when Harry Hall and Conor Gough combined for another 2&1 win while the scoring was again mirrored in the final match as the US duo of Brandon Wu and Alex Smalley got the better of Tom Sloman and Thomas Plumb, 2&1 to draw the sides level.

The match is now perfectly set ahead of this afternoon’s singles matches where Sugrue and Rafferty will get their first taste of Walker Cup action.

Purcell is out in the third match again Owensboro’s John Augenstein (2.15pm) before Sugrue faces off again John Pak in match 5 (2.25pm) and 26-year old Rafferty, the oldest player on team GB&I takes on Greensboro’s Alex Smalley in the penultimate match (2.45pm).

For full scoring and this afternoon’s draw, click HERE