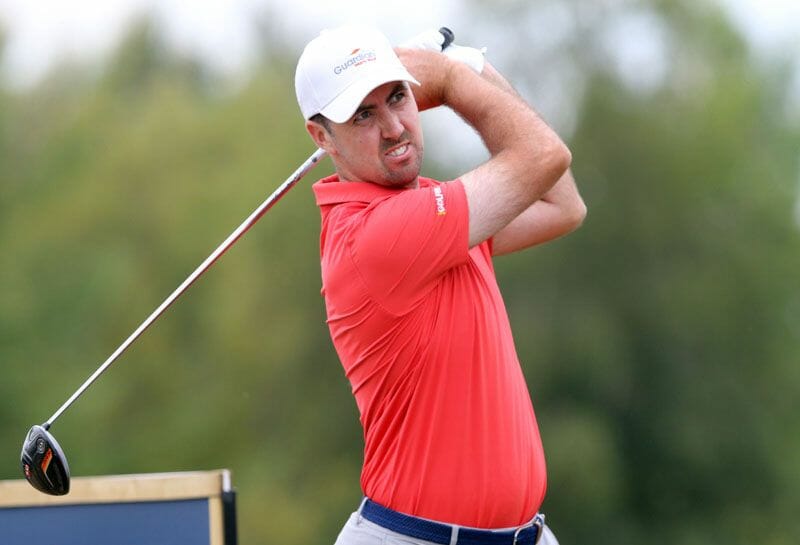 Royal Dublin’s Niall Kearney couldn’t manage a first win of the season but it wasn’t for a lack of trying on the final day of the EuroPro Tour’s PDC Championship at Studley Wood Golf Club.

The Royal Dublin professional was looking to turn around a season that’s largely disappointed to date but despite firing a three-under par 70, the experienced campaigner fell three shots shy of the winning mark after some hot scoring on the final day.

In the end, Kearney had to settle for a consolation cheque worth £1,750 and a share of 4th at nine-under par as he looks to turn his season around right at the death.

Alongside Kearney at nine-under was Clandeboye’s Jonathan Caldwell who did his chances of Challenge Tour promotion no harm with a strong finish.

Caldwell outscored Kearney by a shot on the final day, sizzling with four birdies in his final five holes to race to a top-5 finish of his own. The Northern Irishman will need more of the same during the season run-in if he’s to break into the top-5 on the Race to Desert Springs standings. He’s currently in 11th.

Whitehead’s John Ross Galbraith was the only other Irish player to make the final day’s play but he could only manage a 74 for a plus-one total and a share of 45th.

Meanwhile, Billy Hemstock prevailed in a playoff against Will Enefer to win the event.

Hemstock (Roehampton Club) started the day one shot behind Marco Penge and Nick Marsh and posted a final day score of 67 (-6) bogey-free to take it to a playoff against Enefer with a week of 74, 66 and 67.

Enefer (Retail Furniture Ltd) was way off the pace at the start of play but he signed for a course record 63 (-10) to take him to the top of the leaderboard for the majority of the afternoon.

It was an explosive round with seven birdies and two eagles with his back nine particularly stand out.  Neil Fenwick (Dunbar Golf Club) kept himself in the hunt needing a birdie to make it a three-way playoff but he finished up one short with rounds of 71, 69 and 68 for third.

Going back to the eighteenth, Hemstock drained his putt for birdie whilst Enefer could only bogey it, handing Hemstock his first win on the Tour since Mannings Heath last year.

On victory, Hemstock said: “I felt like I played really well the first day. It was really windy. The second round I stayed patient and they started to drop and I had a good finish with four birdies on the back nine on the trot. I stayed in that sort of mindset and waited for things to happen. It was nice to birdie the last two to take it to a playoff.”

“I’d love to be in contention again at Newmachar. I’ve got a week or so to get my game ready or keep it in good fettle, but I’m looking forward to playing and especially at Tour Championships.”

Highlights of The PDC Championship will be shown on Sky Sports Golf, 17 September at 20:00.

NEXT UP The Newmachar Challenge finishes the season at Newmachar Golf Club in Aberdeen the week after next.