A note for my golfing hero, Tom Watson 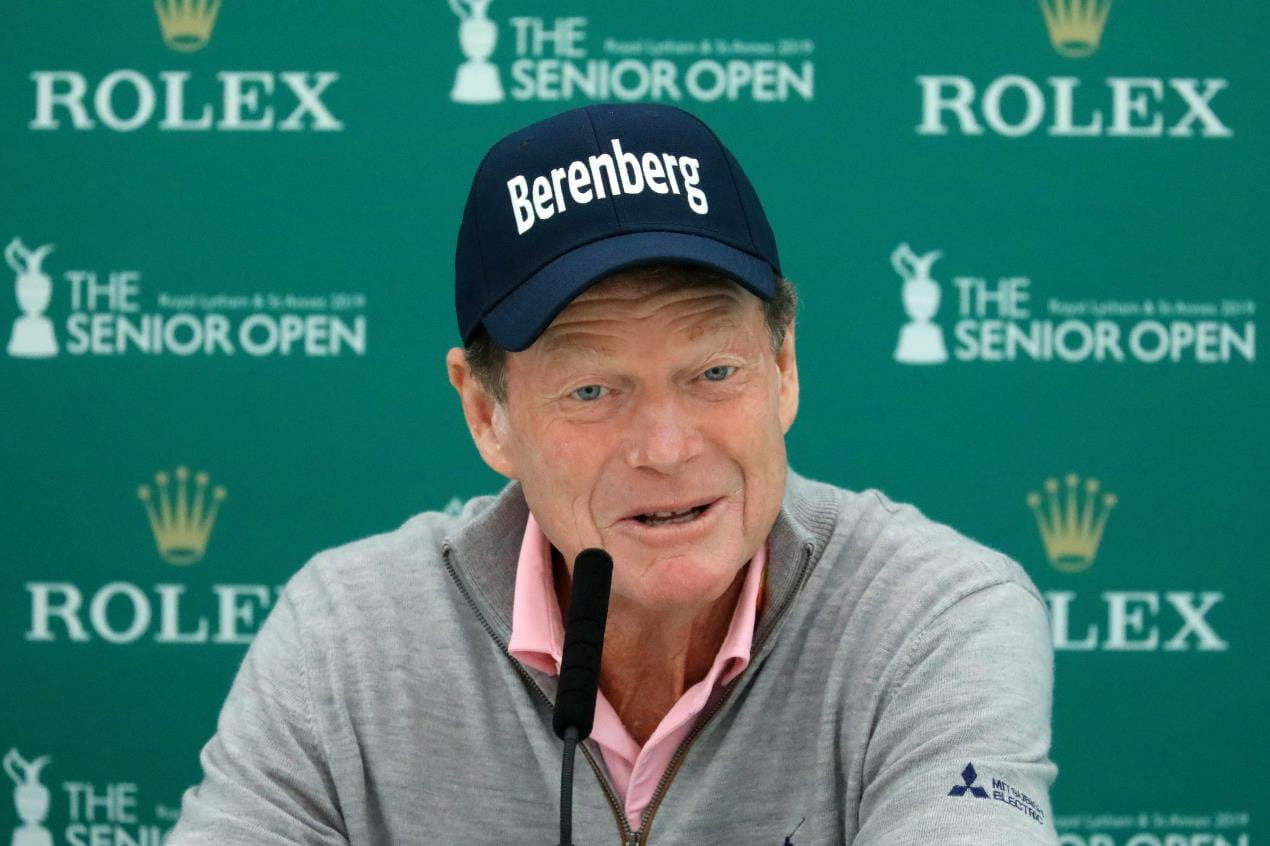 Tom Watson – it’s over. His recent appearance in The Senior Open at Royal Lytham & St Annes was his last in the over-50‘s ranks on this side of the Atlantic.

The competitive fires still burn but the body will not support the level of golf that is required to match and defeat Watson’s peers. St Andrews 2015 was the Kansas native’s farewell to the “real” Open Championship, the one he graced by winning five times. That’s FIVE Claret Jug victories against the best the world of golf could throw at him. Phenomenal.

Most professionals would die happy if they could win The Open just once, but Watson stamped his authority so firmly on the oldest major championship of them all that his legendary status in the game has long been assured and will remain so forever. Add in two Masters, one US Open, 68 worldwide other victories, plus his six Champions Tour majors and it’s elementary: the man was, and is, a wonder.

So, it is with a pang of regret that I have to acknowledge that Old Father Time has finally defeated my favourite golfer of them all. Thanks, Tom. It’s been fun, never more so than at Turnberry in 2009 when your legions of faithful followers hoped and prayed that you could claim your sixth Open at the ripe old age of 59.

Sadly, a beautifully struck 8-iron shot to the heart of the 72nd green resulted in the ball landing a fraction too hard and bouncing into the light rough at the back of the putting surface. Up and down for par, and the venerable Jug was his, something the great man had done so often in his stellar career, but not this time.

He chipped long, missed the par putt back and entered a four–hole playoff with Stewart Cink. With sinking heart, we knew, and Tom knew, though he would hardly have admitted it to himself in the heat of the playoff battle, that his race was done, physically, mentally, and emotionally.

Anno domini, four epic rounds, all the excitement, the disappointment of the last hole, combined to drain the mojo out of our hero. He needed to get the job done in 72 holes and just narrowly failed to get across the line.  Cink won the 2009 Open. We can’t really hold that against him, but dammit, Watson cracking the Open code one last time, six weeks before his 60th birthday and 26 years since his last major win would have been a stupendous story.

Still, no complaints. Once I hitched my wagon to the Watson Roadshow back in the Seventies, I, and many thousands of other Tom fans, got a great run from a great golfer for many decades. All of which set me pondering on the nature of choosing The One – the hero that becomes special to a follower of a particular sport, in this case, golf.

Why Watson for me? Why not Arnold Palmer, Jack Nicklaus, Lee Trevino, or later, Seve Ballesteros or Bernhard Langer? A big part of it was generational and down to the arrival of colour television. Plus, of course, the fact that Watson was a winner when I was taking my first tentative steps in hacking the crap out of golfing turf in the early Seventies. Who doesn’t love a winner?

Palmer was obviously a big name but won his last major championship- The Masters – in 1964. Nicklaus had taken on the mantle of the Big Kahuna (check that spelling), and was worthy of great admiration. But then came Tom Watson, winner of The Open Championship at Carnoustie in 1975. A new challenger to such luminaries as Nicklaus and Trevino. And he came to play in the revived Carrolls Irish Open in August, 1975 which was special.

I liked something about the way Watson carried himself. Couldn’t really define it. He was young and courageous, with an uncomplicated swing, a ready smile, a tidy and highly effective short game. No histrionics, no drama but definitely not dull and robotic like some of the personality-deficient, play-by-numbers pros on Tour in the modern game.

It helped that our Irish horizons broadened further with Carrolls backing the Irish Open and staging it at Portmarnock from 1976 at a time when American stars and the rising tide of European golf really caught the imagination. Colour television arrived in our house around 1975 and came to the fore when the limited broadcasts of golf brought the world heroes into our dining room at Open Championship time.

That was the clincher. Turnberry 1977, the Duel in the Sun, Nicklaus v Watson battling each other ferociously but in exemplary sporting fashion. Every moment shown on colour TV, courtesy of the BBC. Fantastic.

The Golden Bear eventually had to bow the knee to Master Tom but did so with exemplary dignity. Watson reciprocated by accepting the victory with grace and huge respect for Nicklaus. Golf was the winner. And from then on, if asked “who’s your favourite golfer”, my answer was always “Tom Watson.”

I have no idea what Watson is like as a man but that doesn’t matter. If sport reveals character, then Tom has buckets of the good stuff. His respect for golf and the spirit in which the game should be played set an example for professionals and amateurs alike.

Watson deserved better as 2014 USA Ryder Cup captain than to be metaphorically thrown under the bus by Phil Mickelson after Paul McGinley’s European team hosed the Americans 16½ to 11½. The way Mickelson tried to blame the skipper for the failings of the team did Phil no favours. Players hit the shots, and if they take too many, it’s not the captain’s fault.

Hard as that might have been for Watson to take, publicly he never faltered or retaliated. He hated losing, but never stooped to the level of Mickelson in that post-match media conference.

That is the true mark of the man. Golf is all the better for having Watson as one of its greatest players. Thanks for the memories, Tom