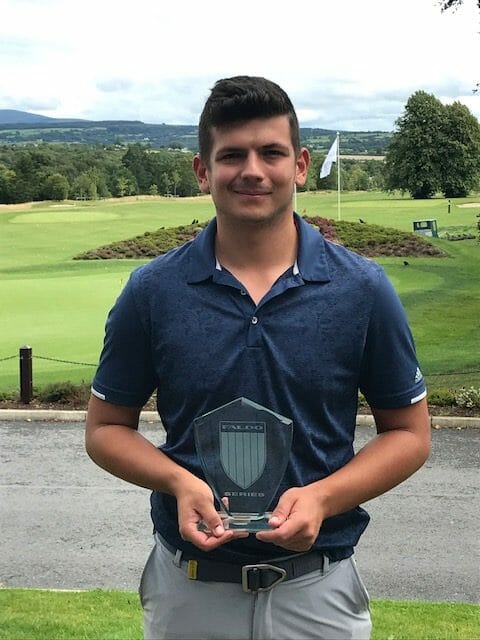 33 talented boys, ranging from Under-16 to Under-21 categories competed over the three days at the striking parkland layout. Rated as one of the top golfing venues in Ireland, Mount Juliet has previously hosted the three Irish Open Tournaments, in 1993, 1994 and 1995, as well as the WGC American Express Golf Championship in September 2002 – and again in 2004.

“Mount Juliet was very challenging this week; luckily my driving accuracy and short game are both going really well at the moment, which helped me get it round as close to level par as I could each day,” said Davenport.

“These three-day events are all about being patient and waiting for the putts to drop – Harry [McGeary] was only two shots behind me going into the final round but I stuck in there and shot a solid 72 to close it out. I’d like to thank the Faldo Series for hosting such a great event and I can’t wait for the Grand Final in November.”

Designed by Jack Nicklaus, the 7,300-yard, par-72 layout combines many features – rolling fairways, water hazards, contoured greens – all of which blend superbly into the spectacular landscapes surrounding this unique estate. Set in the rolling pastures and woodland of South East Ireland, the course is both captivating and memorable. Tiger Woods’ declaration at the WGC that Mount Juliet Estate presented ‘perfect fairways’ and the ‘best greens we’ve putted on all year’, was a rich tribute to the stature of Ireland’s leading parkland golf course.

Three Faldo Series Europe Grand Final qualifying spots were at stake across three different age categories, with Davenport claiming the overall win as well as securing the Under-21 division, after three inspiring rounds of 71, 75 and 72 for a total score of +2.

Northern Irishman Harry McGeary was only two shots behind Davenport after the second round, however, a poor final round saw him drift to 13-over par to finish in sixth place overall.

Irish junior golfers Rory Milne (U-18) and Sean Keeling (U-16) won their respective age categories to book their place at the Europe Grand Final.

“Mount Juliet is a special venue, and we feel very fortunate to be able to host our Ireland Boys Championship there. The golfing talent we have within Faldo Series Europe is astonishing, and to be able to see it improve year on year is superb. Many congratulations to all category winners at this week’s event, in particular to Joshua with a superb total score of +2. I look forward to seeing them all at Al Ain in November for our 23rd Faldo Series Europe Grand Final.”

Past winners include Major Champion Rory McIlroy, along with the likes of English golfing stars Eddie Pepperell, Matt Wallace and Danny Willett.