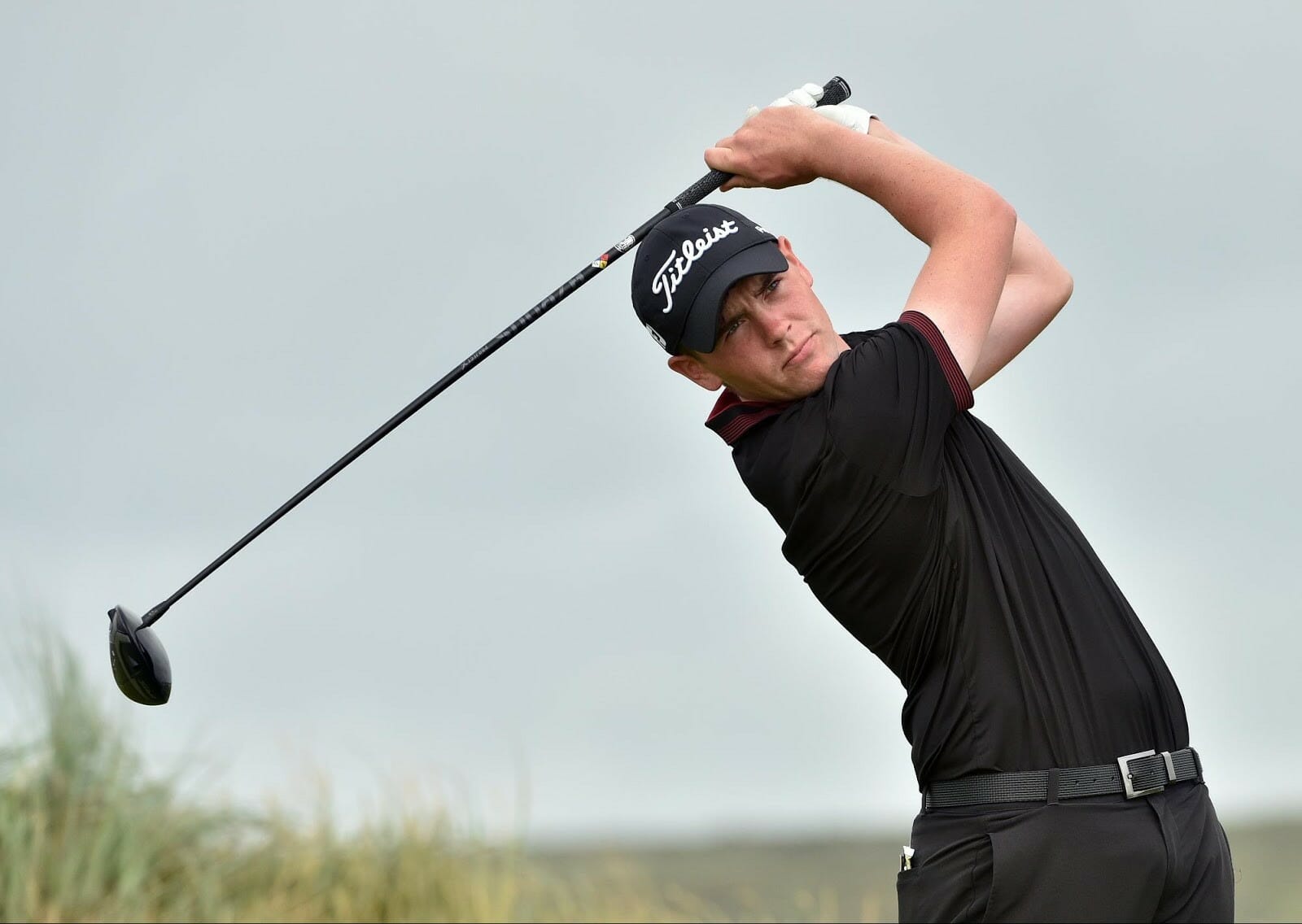 Robert Brazill tees off at Ballybunion. Image by Pat Cashman

Day by day, the skies clear at Ballybunion. Now the final four are known, no longer does the trophy loom. The golfing gods are ready to cast light upon the champion of the AIG Irish Close.

“I know how big it was last year to get a win and what it meant,” said Brazill, who booked his semi-final ticket with victory (4&2) over Cathal Butler of Kinsale. “I think my game is good enough to win another championship.

“I’ll be the underdog anyway,” said the 18 year old, who took down local favourite Edward Stack (Ballybunion) in the quarter finals. “If I get something going with the putter again, I might be able to cause a bit of an upset.”

In the summer of his Leaving Cert, Denvir has unleashed his A game at the Close. The St Andrew’s College student delivered the knockout blow on 19 against Stack, silencing his opponent’s vocal gallery.

“A few roars out there were nearly like it was an All Ireland Football Final for Kerry but I was focused on my own game,” Denvir stated. “I enjoyed the challenge.”

Of the four remaining, top seed Mullarney is the beacon. He blazed a trail in qualifying, six shots better than second best, and now the silver medallist has gold in his sights.

“I’ve never been to the semi-finals,” Mullarney revealed. “This is new territory.”

To come this far, he had to pass his toughest test. For the first time, Mullarney went beyond 15. Against Sean Flanagan (Portmarnock), a familiar foe from Connacht interclub fare, he forged ahead with three holes left.

“We were going at each other all day,” Mullarney relayed. “It was a great game.”

Flanagan moved ahead on seven and stayed in front until his rival birdied 10. Mullarney had trouble at 12 as Flanagan struck a stunning tee shot to regain control. On 13, the tables turned when Flanagan fumbled. Mullarney squared the match by making off with birdie four.

All square heading to 16, Mullarney produced the telling move. Another birdie turned the match his way. He could have closed it out on 17 but suffered an unlikely slip.

“I didn’t think it was possible but I misread a three footer,” Mullarney explained, still incredulous about a spurned opportunity for the match. “I just thought: ‘Put a good swing on it going up 18.’ It came out like a rocket and I hit in the bunker.”

Flanagan took driver down the last, pursuing birdie fast, but pushed his tee shot right into the rough. Unable, even, to work a par, the valiant man conceded. Mullarney stood standing still, courtesy of a two holes win.

“It’s always a tight match,” Mullarney reflected, having faced Flanagan three times previously. “I’m quite golf smart. I kind of pick my way around the golf course rather than bomb it.”

However it plays, Ballybunion is rarely overpowered. While the rain relented and winds slackened slightly, day four threw up another steep challenge.

“With the wind, I have slowed my tempo down a good bit,” Alan Fahy explained. “I have been striking it pretty well and hitting a lot of good shots in the strong wind.”

Fahy, 21, prevailed 3&1 against Dundalk’s Eoin Murphy to move within one match of the final. He faces Robert Brazill in the semis, armed with a previous win against the Kildare man at the North of Ireland.

“I barely remember beating him in the North but I know it’s going to be a really tough game and I am going to have to play really well to win,” insisted Fahy, who had to withdraw from last month’s South of Ireland when his grandmother passed away.

“I just need to play well,” Fahy added. “That’s the bottom line. I’d love to do well and get something out of the season.”

A win at the Close would add to Fahy’s 2018 victory at the Munster Stroke Play. But Brazill is just as hungry for a title shot.

“It would be massive to win this,” he professed. “It would be nice to call yourself an Irish champion.”