Getting a read on Rory’s problem 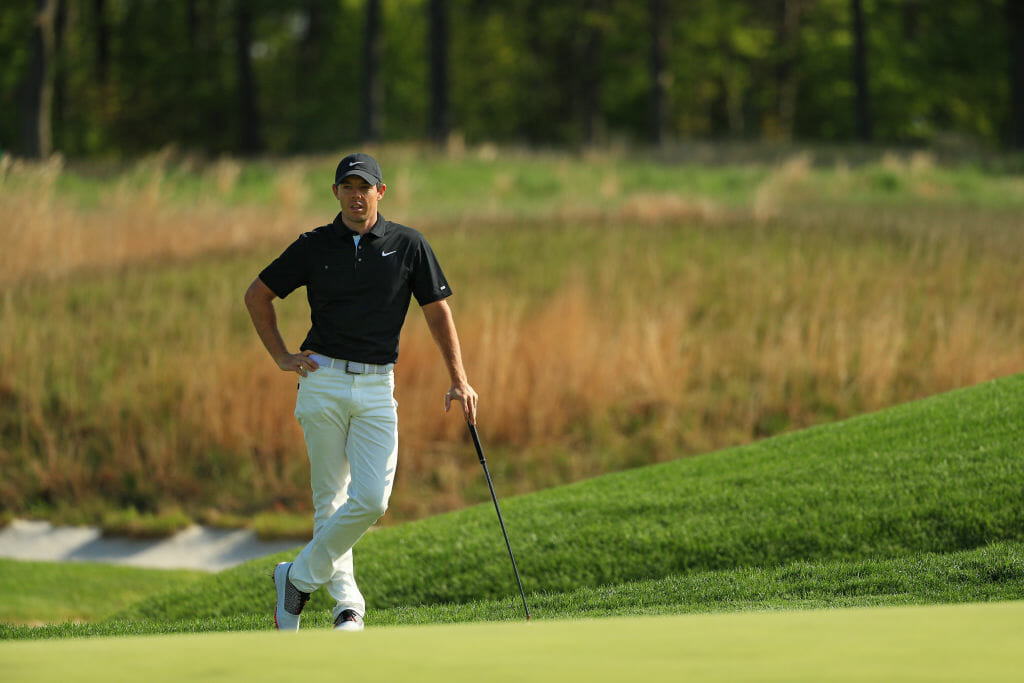 During the opening round at the 2018 Irish Open in Ballyliffin, I followed Rory McIlroy for the opening nine holes of his challenge. One of the advantages of being in media is that you can follow the play from inside the ropes, meaning that the Tiger-esque crowds that McIlroy attracts prove no obstacle to a great view.

After striking the ball well with little reward, the par-five fourth looked like it may provide the spark to ignite the four-time major champion after a trademark towering iron came to rest inside six feet leaving an eagle putt.

Now, this is where the media credentials really set the viewing experience apart. Several other media colleagues and myself were able to get greenside in ample time to take up a vantage point directly behind McIlroy’s ball and put our (admittedly amateur) green reading skills to the test. “Right edge” said one, “just outside right” said another, but that it was right-to-left was the unanimous consensus.

Rory started his putt left edge and watched it drift further, to a bemusement that his body language did little to hide. A tap in birdie followed, but there was the unmistakeable air that some of the wind had been taken from the tournament host’s sails.

As Matt Fitzpatrick and Thorbjorn Oleson – McIlroy’s playing partners – putted out and made to exit the green, Rory returned to the spot to take the putt again. Again, he started it left edge, again it missed left. Shaking his head, he scooped up his ball and made for the next tee.

Now, don’t get me wrong. This is not an attempt to suggest that these other hacks or myself are superior green readers to the number three ranked golfer in the world, but all too often this memory is dredged up as McIlroy appears confounded after missing a relatively short putt.

Most recently, at the par-five third in Memphis on Sunday, a tasty chip had left him little over three feet for birdie. The putt wasn’t even close. Again, McIlroy’s body language suggested a terrible read as opposed to a terrible stroke. Either way, it set the scene for what has become an all-too familiar final round fizzle from the Northern Irishman.

Now, here’s the thing. If Rory is to be believed and that green reading – particularly on putts inside ten feet – is a problem, then why doesn’t he enlist the help of his caddie more often? Harry Diamond is a superb golfer in his own right. A former West of Ireland champion, Diamond competed as an amateur in the Irish Open in 2012, and although he missed the cut, he did beat several established tour professionals and one major champion.

As in his previous partnership with J.P. Fitzgerald, McIlroy is very much the alpha of the pair, but that’s hardly surprising for a child prodigy who’s grown into the most successful professional of the past decade. But something is quite clearly amiss when a three-foot putt is missing by a good three-to-four inches.

Maybe it’s time for Rory to rein in the ego a touch and ask for help from the guy that he’s paying to provide exactly that on the course. I don’t subscribe to the theory that Diamond is unqualified for the job and merely filling the role of bag carrying friend – quite frankly, I don’t have enough inside information to form a particularly valid opinion either way – but Rory’s tee-to-green game – the disastrous opening round at Portrush aside – has never suggested that club selection and strategy are areas in which he struggles.

No, it’s on the greens and with the flatstick that he comes unstuck. Perhaps what he needs, particularly when the pressure is on, is somebody to ease the burden. Somebody to read his putts, easing the pressure somewhat, so all he has to worry about is his stroke.

Maybe Harry’s the guy, but if not, then maybe it’s time to hire an expert green reader who’s capable of carrying a bag.