Callaway Golf became the first equipment manufacturer to have a driver removed from a player’s bag and deemed non-conforming after random driver testing by the R&A before this year’s Open Championship in Royal Portrush.

Following a second-round 65, Xander Schauffele revealed that his Callaway Epic Flash driver was tested on Tuesday and found to be non-conforming.

Schauffele struggled with his replacement driver on Thursday, hitting just 6 of 14 fairways on his way to an opening 74 but Callaway Tour staff made him another driver on Thursday evening that he gamed on day two shooting 65 – a score that left the American in a tie for 18th going into today’s third round.

“Thursday’s driver wasn’t really matching my bag, which was a bummer. I was getting a little upset on the golf course,” Schauffele said. “Thursday night I was testing a little bit on the range again with two different heads. But moved a few weights around and sort of found a good setting.”

Schauffele had no issue with his driver being tested, he did however question why the R&A only tests random samples and not all drivers.

“I had a little bit of a run-in with them because they only test 30 players. I thought it was a little bit unfair,” he said. “I would gladly give up my driver if it’s not conforming. But there’s still 130 other players in the field that potentially have a non-conforming driver, as well.”

The R&A began randomly testing individual player’s drivers at last year’s championship in Carnoustie but none of the 30 that were tested exceeded the COR standards.

In a statement the R&A said “We offer the testing as a service to players so that they can ensure that their drivers conform. We believe that 30 is a reasonable sample and a practical option for conducting this process in the week of a major championship.”

Speaking before the championship in his annual R&A press conference the Chief Executive of The R&A Martin Slumbers said “In terms of the driver testing, we’ve always done driver testing — we’ve done it for many, many years at The Open as a service for the players. You’ll recall that last year for the first time we said we wanted to test a random sample of players and we did the same thing this year. And we will continue to do that as we’re going forward. I think it’s very important that the players, we work very closely with them and with the manufacturers to make sure that the equipment rules are in line” said Martin Slumbers in his press conference.

It’s an embarrassing discovery for both Schauffele and Callaway Golf and based on the player’s reply to the R&A, he seems to be suggesting more would be found to be using illegal non-conforming drivers if more were tested.

What is COR testing?

There is a limit as to how much the face of any driver is allowed to spring at impact. This limit was introduced in 2003 and is referred to as the “COR” of the clubhead. COR is an acronym for “Coefficient of Restitution.” It’s a term from the world of science and physics describing the energy transference between two objects – In golf terms, a driver face to a golf ball, think of a trampoline effect.

This COR rate is set to 0.830 and the goal for all manufactures is to get their faces as close as possible to the limit that they can but it’s a complicated process. The most minute of adjustments will make a difference to a clubs COR, polishing, adding paintwork to a head that comes off the manufacturing line etc will leave a clubface measuring differently all across a clubface.

It’s a trade-off and equipment manufacturers have to avoid producing anything that breaks the rules as it would be an illegal golf club. Manufacturers dial back away from this 0.830 limit to give them a little bit of tolerance and room to work with through the manufacturing process meaning every driver you pick up will measure differently and indeed perform and feel differently.

In designing the 2019 Callaway Epic Flash engineers used an artificially intelligent super computer to cycle through over 15,000 face architecture iterations for the Epic Flash and Callaway claimed to have developed a more efficient structure with each one. 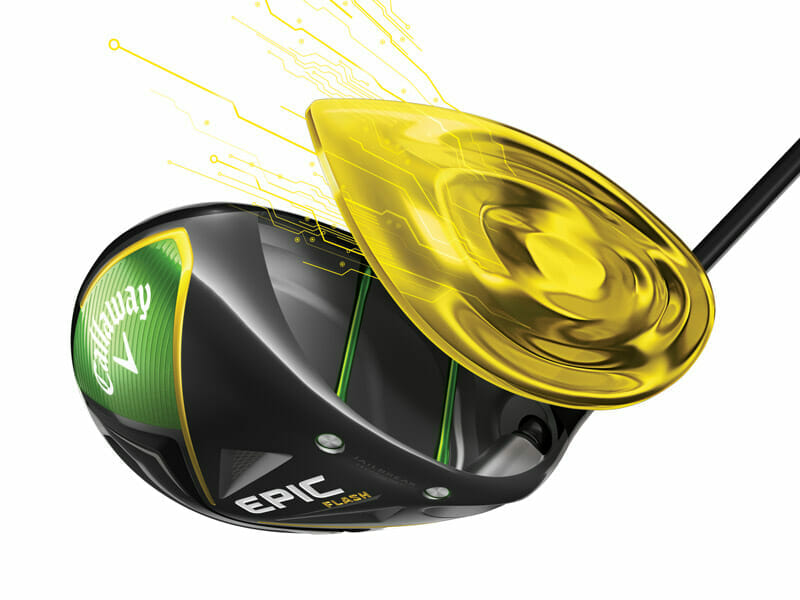