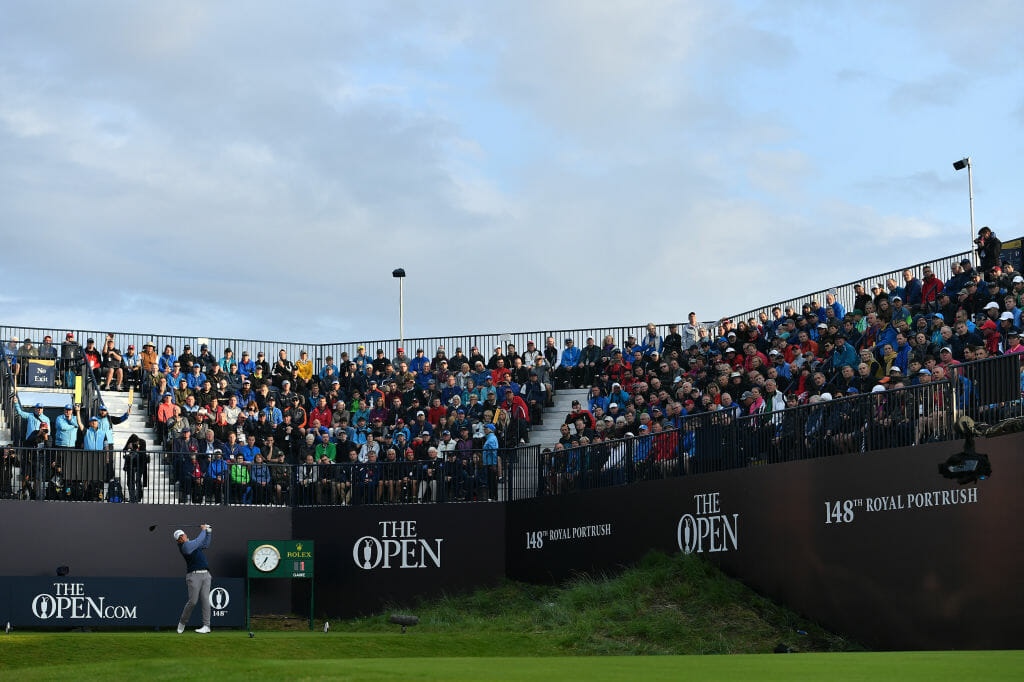 Antrim , United Kingdom - 18 July 2019; James Sugrue of Ireland watches his shot on the first tee box during Day One of the 148th Open Championship at Royal Portrush in Portrush, Co Antrim. (Photo By Brendan Moran/Sportsfile via Getty Images)

As far as mornings go, few will come better than today for Mallow’s James Sugrue who didn’t look at all out of place alongside local favourite, Darren Clarke on day one of the 148th Open Championship at Royal Portrush.

The 22-year old was tasked with following veteran Clarke’s opening tee shot down the fairway and he duly obliged, finding the centre cut to get his tournament bid underway to boisterous scenes at the Dunluce Links.

Settled after an opening par, The Amateur champion got into his work soon after, picking up a shot at the par-5 second before trading three more gains with four dropped shots in a superbly composed opening round of level par 71, achieved despite the obvious nerves that come with lifting the curtain on one of sports most anticipated productions.

“I was definitely the most nervous I’ve ever been on the golf course this morning when I looked up at the grandstand and it was just packed,” smiled a visibly relieved Sugrue post-round.

“And Darren walked on in front of me and the roar was just unbelievable. I was very nervous for the first and the second. I birdied the second, it set me in a little bit. And just enjoyed it really from there on in.”

Having earned his place in the field with a stunning match play victory last month at Portmarnock, that experience in front of a raucous 3,000 people spurring him on no doubt stood to the Corkonian. Still, with expectations set low, Sugrue quietly went about his business seemingly unmoved and was just glad to be finished knowing what lies in wait for the rest of the field this afternoon.

“I just didn’t want to put myself out of the tournament on the first day, shoot like a big number or something,” he added. “Obviously I bogeyed 16 and 17. They’re playing tough, and I’m sure there will be a few bogeys there today.”

Heartened by the familiar voices ringing in his ear from outside the ropes, Sugrue’s round of 71 should now be sitting on the healthy side of the leaderboard come day’s end, much to his supporter’s delight.

“I heard a couple of lads, a couple of voices that I definitely recognized. On the 17th tee, [it] was a giveaway!

What does one do to follow a morning rubbing shoulders with the world’s best as a competitor at his debut Major championship?