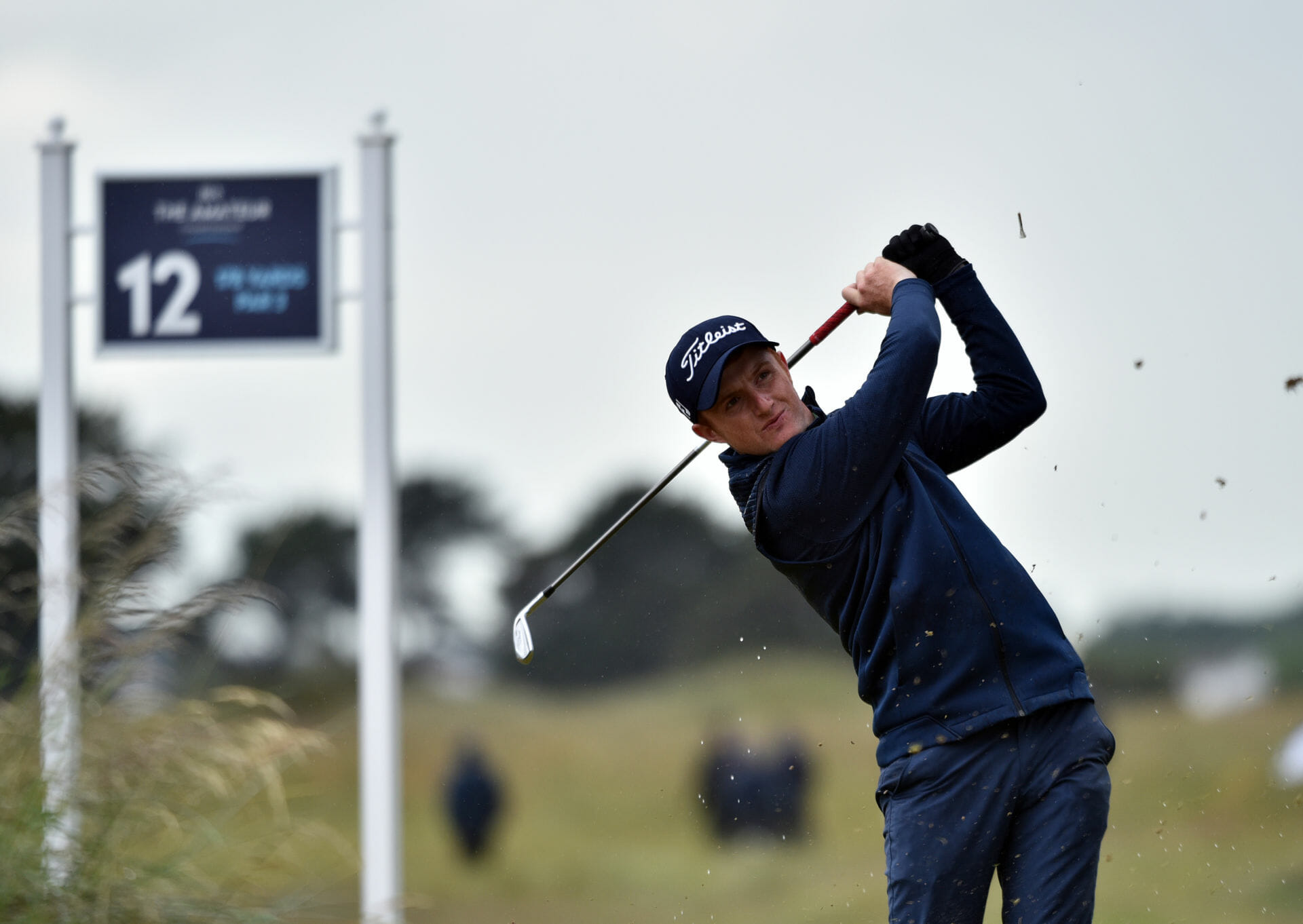 Ronan Mullarney (Galway) driving at the 12th tee in the fourth round matchplay of the 2019 The Amateur Championship at Portmarnock Golf Club today (20/06/2019). Picture by Pat Cashman

James Sugrue of Mallow and Galway’s Ronan Mullarney delighted the large galleries at Portmarnock Golf Club by battling their way into the quarter-finals of The Amateur Championship yesterday.

Sugrue produced a miracle escape from being three down with four to play against Sweden’s Christoffer Palsson in the morning. Just when all looked lost, Sugrue dug deep to recover and snatch a win by one hole. He then gave Sergio Parriego Cornejo of Spain his P45 by 5&3 in the afternoon.

Mullarney did little wrong when eliminating Sweden’s Ludvig Aberg by 4&3 in his morning match, but had a much closer call before edging out Matty Lamb of Hexham with a one hole victory in the afternoon.

It was tough and it was dramatic at times, but the last two Irishmen of 22 home starters did themselves, their clubs, and their country proud by their resilience and their ability to produce the shots they needed when under pressure.

And pressure came their way, particularly for Sugrue in his morning encounter with Christoffer Palsson.

These two had history, as Palsson had knocked out the Corkman at the same stage in last year’s Amateur Championship.

The Swede looked odds on for a double over 22-year-old Sugrue when he eagled the par-5, 13th to get to 3-up. They halved the 14th in par but credit to Sugrue, he never buckled.

The famous par-3, 15th hole down beside Portmarnock Beach proved a turning point when Sugrue produced a deft pitch and run with a 9-iron to five feet and holed out for a winning par.

“That was a bit of a tricky one but I had a good line on it and rolled it down,” he said.

He then birdied the par-5 16th, and took advantage when Palsson was in trouble off the tee on 17. A solid par by Sugrue was enough to bring them all square going down the 18th.

A drive and 8-iron to 20 feet and two putts then got the job done for the home player after Palsson again missed the green with his approach shot and failed to get up and down.

Sugrue has grown in confidence through the week, and credited a new Titelist driver and a new lob wedge for boosting his play off the tee and at the business end of the scoring game. 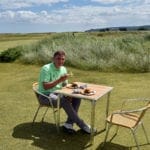 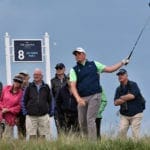 James Sugrue (Mallow) driving from the 8th tee in the fourth round matchplay of the 2019 The Amateur Championship at Portmarnock Golf Club today (20/06/2019). Picture by Pat Cashman 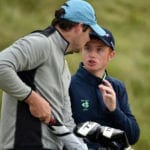 Ronan Mullarney (Galway) with his caddy Jake Whelan on the 12th green in the fourth round matchplay of the 2019 The Amateur Championship at Portmarnock Golf Club today (20/06/2019). Picture by Pat Cashman

Mullarney looked the epitome of steadiness on Wednesday and again in his Thursday morning match with Ludvig Aberg. They turned with the Galway player one-up and playing nicely controlled golf.

Aberg, by contrast, got himself into all sorts of bother with some loose shots on the homeward stretch, and bogeys on 13, 14, and 15 cost him the match.

Mullarney then faced big-hitting Hexham GC golfer Matty Lamb in round four. For all that he is an impressive player, particularly off the tee when he hits it out of the middle of the club, Lamb could not get to grips with Mullarney – at least, for the first eleven holes.

Three under par for 11, and 5-up in the match, Mullarney looked a sure thing to coast home, but a bogey four on the par-3 12th opened a chink in his armour.

Further losses came on holes 14, 16, and 17, but Mullarney saved the day with a superb 8-iron shot out of the rough from 170 yards to 20 feet and made par for a half and the match.

“Through 11 holes, the mood was great, I was five-up. And then the mood started to change a little bit.
“I hit a couple of bad tee shots, and it  (the rough) is very penal. I don’t think I was hugely nervous — okay, I was nervous on 18 — it was probably that I wasn’t functioning 100 per cent with my swing so I will just hit a few more balls and iron that out, ” said Mullarney.