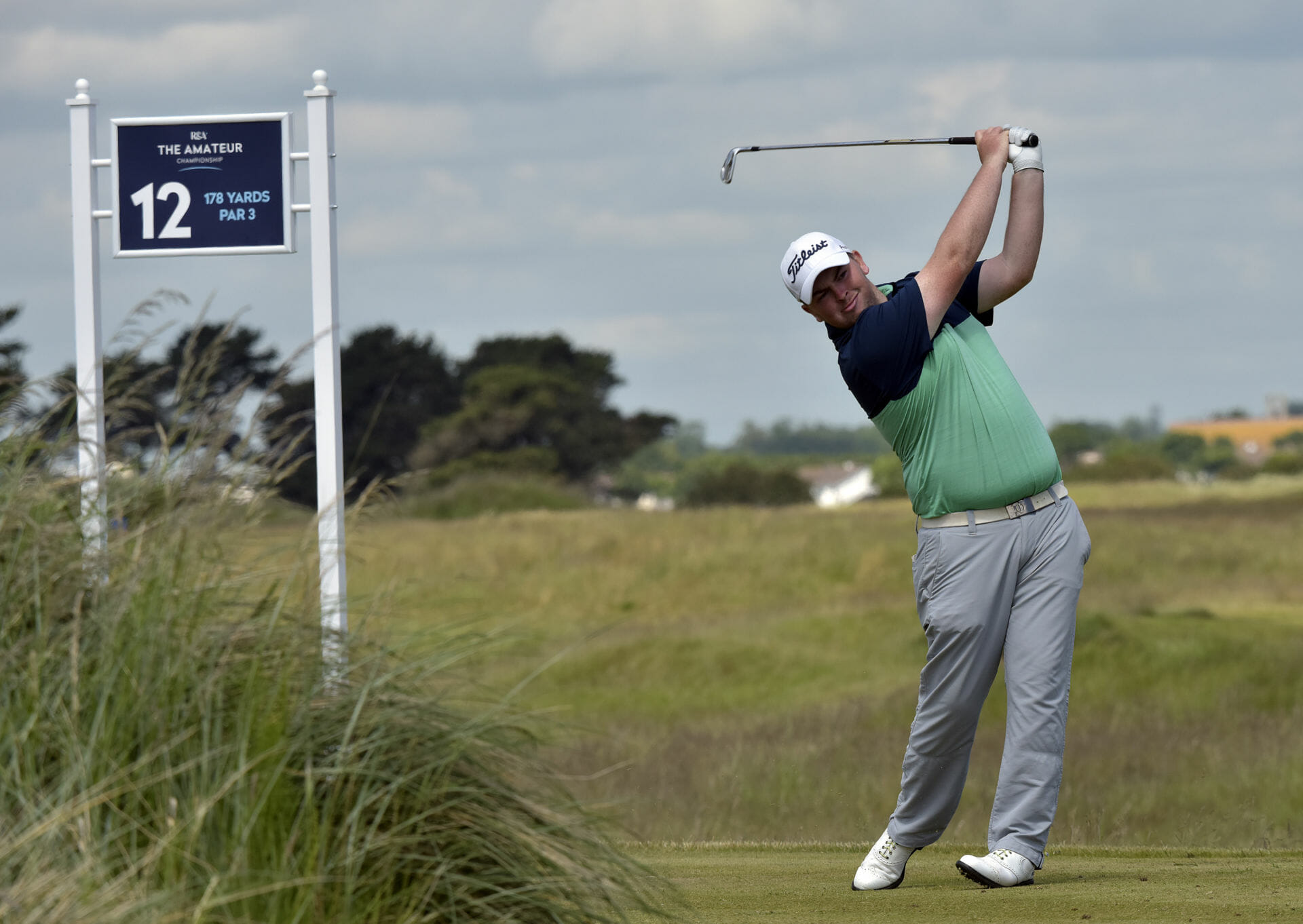 Caolan Rafferty of Dundalk GC led a small band of home qualifiers into the match play stages of The Amateur Championship which start today at Portmarnock (Old).

Rafferty, 26, was the essence of composure in negotiating the 36 holes of stroke play qualifying. He filed 74 at The Island (par 71) on Monday and a Tuesday 68 over the renowned Portmarnock (par 72) layout for a one-under par 142 total.

The Walker Cup panel member and reigning West of Ireland and South of Ireland title holder clearly relished the opportunity to compete against the cream of international talent in this venerable Championship.

A relatively late bloomer in the senior ranks of Irish golf, Rafferty wants to make up for lost time.

“I wasn’t doing this five years ago. It’s all a learning curve, to get to these events.

“I’m 26 so I’m going out there to enjoy it [golf] at this stage. I’m playing the biggest amateur competition we can play in on this side of the water. Why not just enjoy it? If you do well, you do well. It’s not going to make or break your next day.

“I love competing at this level now. I’m after getting my foot in the door. I might as well try and stay there,” he said.

That said, he was not quite as calm as he might have wished after his first round 74 at The Island.

“Yesterday I had three bad lip outs. I wasn’t really myself yesterday. It’s the first time I got angry on a golf course in a long time,” he said.

A chat with friends, including Portmarnock’s Conor Purcell with whom Rafferty is staying this week, helped restore his perspective and he went out to enjoy himself in round two.

“If you enjoy it, you can play well then. To shoot 68 around that golf course (Portmarnock) is always a nice feeling,” said Rafferty.

The Dundalk golfer was joined in the 64 plus ties who came through to the knock out stages by fellow Irishmen Eanna Griffin of Waterford, James Sugrue (Mallow) and Galway’s Ronan Mullarney (Galway).

Mullarney had a close shave but 72 at The Island in round two combined with his Portmarnock 75 for  +4,147 got the job done.

Otherwise it was disappointment for the remaining Irish starters, particularly for Portmarnock member Conor Purcell. Purcell, Amateur Championship semi-finalist last year, and winner of the Australian Amateur title in January had hoped to capitalize from local knowledge, but never got into his stride. He bowed out with 75 on his home course after shooting 76 at The Island on Monday.

Portmarnock’s other representatives, Geoff Lenehan, who struck the opening shot of the Championship at 7.0am on Monday, and James Fox also made their exit.

Tom McKibbin, the 16 year old Holywood golfer, shot a four-over par 75 at The Island on Monday before taking a Biology exam at a nearby Dublin school, courtesy of permission from the Northern Ireland education authorities.

That was McKibbin’s final exam in the GCSEs which have been going on for the last few weeks. Another 75 at Portmarnock ended his debut in The Amateur Championship but he will no doubt benefit from the experience.

England’s Thomas Plumb from Yeovil GC was the leading qualifier. Plumb bobbed and weaved his way safely through the challenges presented on the two North Dublin links courses, scoring 68 (Island), and 71 (Portmarnock) for -4, 139.