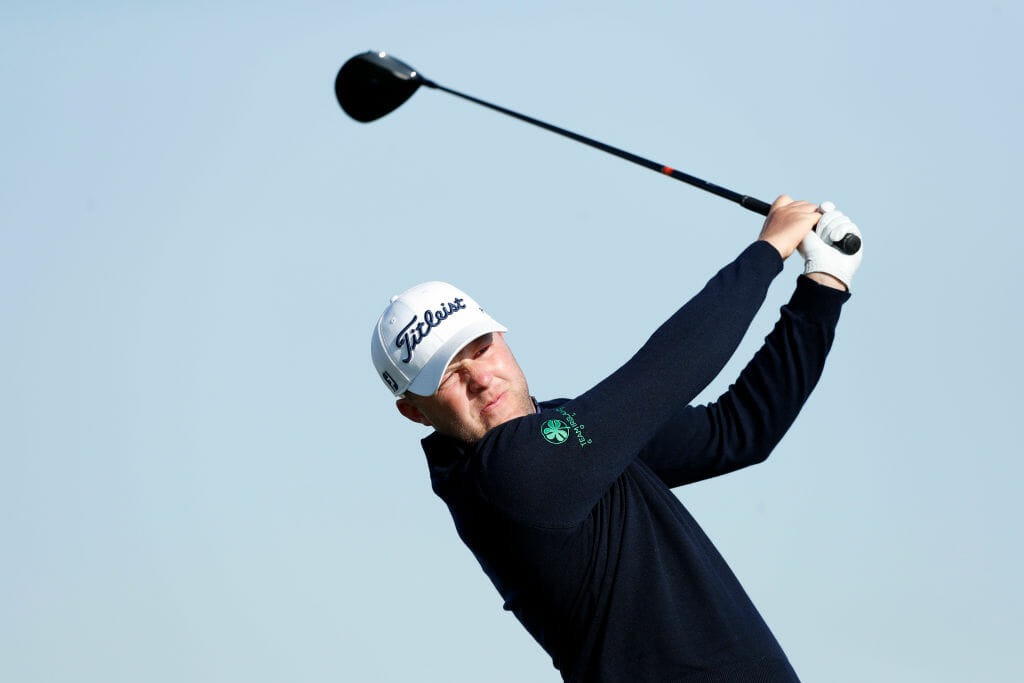 The Naas professional fired four birdies, including three in his last four holes to tie 20th at two-under par for the week having posted rounds of 75 and 66 for the first two days.

Yates was joined by Paul McBride as the only other Irish player to advance to Saturday’s final round and The Island golfer posted four birdies of his own in a two-under par 69.

The Dubliner had made the turn in just 33 wallops and ended the tournament in a share of 29th at plus-one.

In a closely fought final round, Italian Gregory Molteni was at the top of the podium for the first time in his 13 year career as a pro with a final score of -11 for the three days to take home the €5,800 prize money.

He started the day one stroke ahead at -7 of his playing partner, Austrian Timon Baltl at -6. Both Molteni and Baltl played a steady first 6 holes, each birdying the first and then serial pars until the 7th where Molteni’s one stroke advantage disappeared when Baltl birdied the hole. Neck and neck coming into the 8th the pressure increased as Molteni made par but Baltl carded another birdie to draw one stroke ahead.

Unfortunately, Baltl’s hooked his tee shot on the par-5 ninth into the high rough on the left of the fairway. The ball was declared lost but Baltl still managed bogey with his second ball. However, Molteni carded a birdie to take back the lead as they started the back nine.

Molteni faltered on the 11th with a double bogey for Baltl’s par which saw his lead evaporate and put Baltl in the lead again by one stroke. Molteni response was immediate with a birdie on the par four 12th to put the players all square again.

The Italian sun seemed to be shining on him as he birdied the par three 13th versus Baltl’s bogey. Molteni was back in command with a two-stroke lead heading into the final five holes. Molteni preserved his two-stroke lead as both players parred the 14th and 15th. With just three holes to go,Timon Baltl had not had his last word as he continued to fight back hard and birdied the 16th whilst Molteni made par.

The two-stroke lead was now down to one with just two holes to go. Both players demonstrated nerves of steel at the 17th with a birdie for each. The final hole was now the decisive one. Hole 18, par four, just one stroke difference and everything to play for. Could Timon force a play-off? Here he talks us through the final hole:

“I hit a great tee shot on 18 which is very, very difficult and Gregory missed his one into the water. I made a bad second shot, missed the green, maybe I was little bit too aggressive going for the flag. Quite a good chip then just missed from 1.5 metres to force a play-off. Of course, at the moment I’m very disappointed but anyway happy with the game this week.”

So, Gregory Molteni came through victorious to raise his first professional trophy in an international tournament.

“I’ve been close many times but never won,” he said. “I want to dedicate this win to my father Pietro, today it’s his birthday. I have wanted to dedicate something to him for a long time and now I have this opportunity”.

Besides playing on the Alps Tour, Molteni has also played on both the European Tour and Challenge Tours with some good rounds, but no victories. However, he has not been a regular tournament player in recent months having turned his focus to teaching.

“Maybe my change of focus to teaching has allowed me to put less pressure on myself, to be less obsessed about performance and perfection.”

He did not neglect to pay tribute to his playing partner, Timon Baltl:

“Timon was a hard contender. He never gave up during the whole round. On the 18th, I thought we would go to play-off.” Indeed, Baltl’s result today moves him up to fourth on the Order of Merit in this, his second year on the Alps Tour.