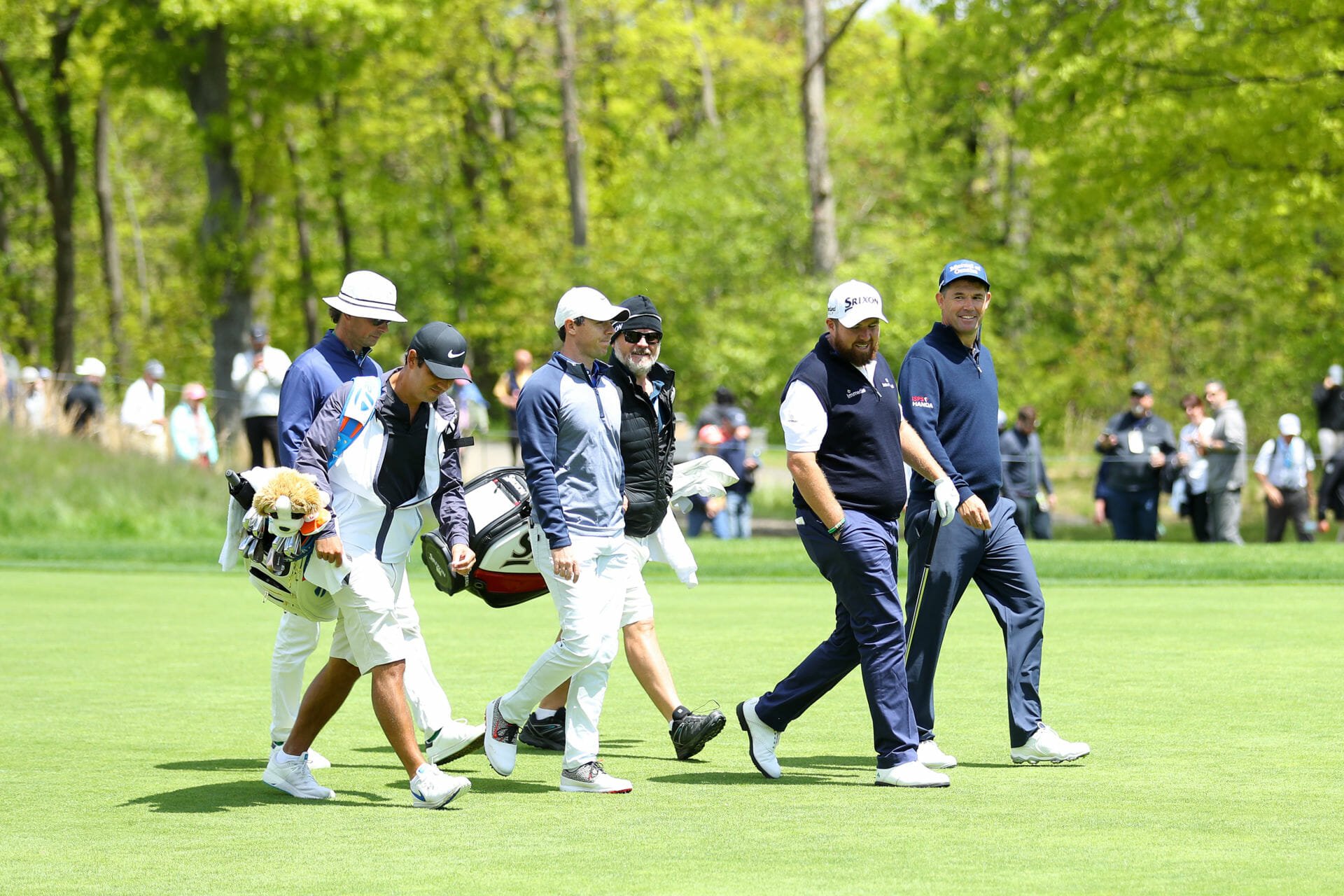 Rory McIlroy, Shane Lowry and Padraig Harrington during a practice round (Photo by Warren Little/Getty Images)

Rory McIlroy leads a quintet of Irish hopefuls in Toronto this week for the RBC Canadian Open as he ramps up his preparations for next week’s US Open at Pebble Beach.

McIlroy tees up for a first time at the event having missed the cut at The Memorial last week, and the 30-year old admits that he’s glad to have another tournament upcoming in order to best prepare for the year’s third Major.

“I was glad to have it either way, whether this was a good week or not,” said McIlroy. “I feel like I really need to play my way into the U.S. Open considering how I’ve played the last three years.”

McIlroy has enjoyed being in Toronto already having taken in a Raptors game over the weekend, with the Canadian basketball outfit making a rare appearance in the NBA finals. And he should enjoy his time on the golf course too with the Holywood star joined by plenty of familiar faces this week, though not all of them will be competing next week in California.

Padraig Harrington and his 2016 Olympic Games partner, Seamus Power teed-up at RattleSnake Point on Monday hoping to join in next week’s fun, however both players fell short of the qualifying mark, with Harrington missing out by two shots at Milton after posting a pair of one-under par 71s.

Power’s quest to tee-up at Pebble Beach ended when the West Waterford golfer doubled the par-3 13th to slump to two-over through 31 holes. When he parred the next, Power advised his playing partner that he was not continuing.

In Power and Padraig’s absence, joining McIlroy at Pebble Beach will be past US Open winner, Graeme McDowell and Offaly star, Shane Lowry who will both finalise their preparations starting Thursday in Canada.

After enjoying a top-10 finish at the PGA Championship at Bethpage Black, Lowry has been at home honing his links skills ahead of next month’s double whammy of an Irish Open at Lahinch followed by an Open Championship at Royal Portrush. Still, he’s determined not to let his mind wander too far ahead with plenty to come before the links swing over the next two weeks across the Atlantic.

“I think the course is like an old school, tree-lined track, so it should be a low-scoring affair, like a regular PGA Tour event,” said Lowry in his PaddyPower column having arrived in Canada on Monday.

“I don’t want anything that’s too hard the week before a Major. I just want to see where my game is and how it’s shaping up. It comes at a good time in the schedule for me. If I didn’t play, I’d be three weeks without tournament play ahead of next week’s US Open – which wouldn’t be ideal.”

“It’s great to be able to play in Canada the week before a Major though. I’m playing well at the moment, so the plan is to stay positive and take it as it comes.”