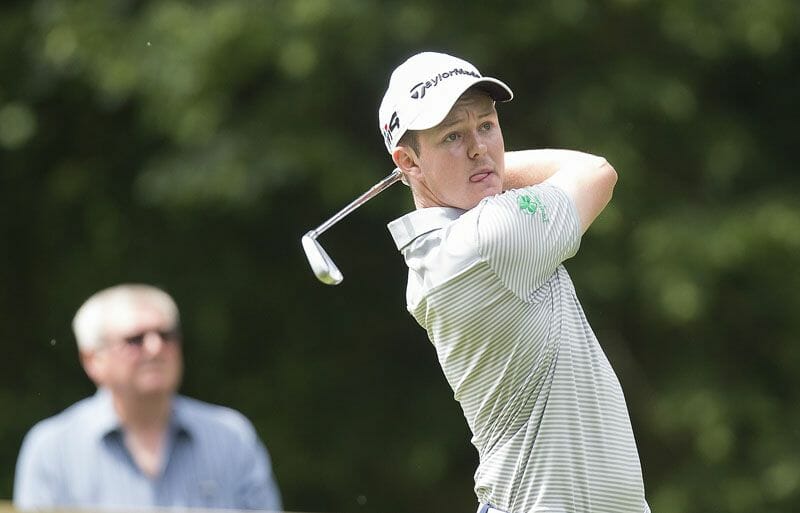 Whitehead’s John Ross Galbraith fired his second straight four-under par 69 to grab a share of sixth spot at the close of the IFX Payments Championship at Brocket Hall.

The Northern Irishman was in fine form, posting seven birdies to reach an 11-under par tournament total that saw him collect a healthy £1,625 for the finish.

Unfortunately, the news wasn’t so good for The Royal Dublin’s Niall Kearney who signed off on an encouraging week with a disappointing two-over par 75 as he fell to a share of 14th on minus-seven when hopes of victory were high.

That was the same number as Ballymena’s Dermot McElroy who struggled to replicate his scorching 66 on the opening day. McElroy signed off on a positive note, however, with a one-under 72 as his EuroPro season got off to a fine start.

Attached to Brocket Hall itself, Clements went to 16-under with a final round of 67 to clinch the title with his nearest competitor, Andrew Wilson of Rockcliffe Hall, finishing up on 15-under.

Clements, who came through Q School tied 12th, was on form and consistent throughout hitting three rounds of 68 in his first two rounds.

Todd Clements on his debut victory said: “I really enjoyed it. The course was in great condition and a good well run event is always going to be a success.”

Going into the final round: “I’ve always tried to do one shot at a time and hopefully, I’m in contention. Then go through the nine holes and you know, make the decision do I go for it or not.”

On the end: “A lot of relief really. I’ve been under a lot of stress, five hours is a long round of golf. I’ll enjoy it with my team and family tonight and let it settle in.”

Wilson’s remarkable knock of eight-under on his final round meant he took the course record with his round of 65.

Elsewhere, the overnight clubhouse leader Guy Woodman couldn’t better his total of eleven under, going level par in his final round.