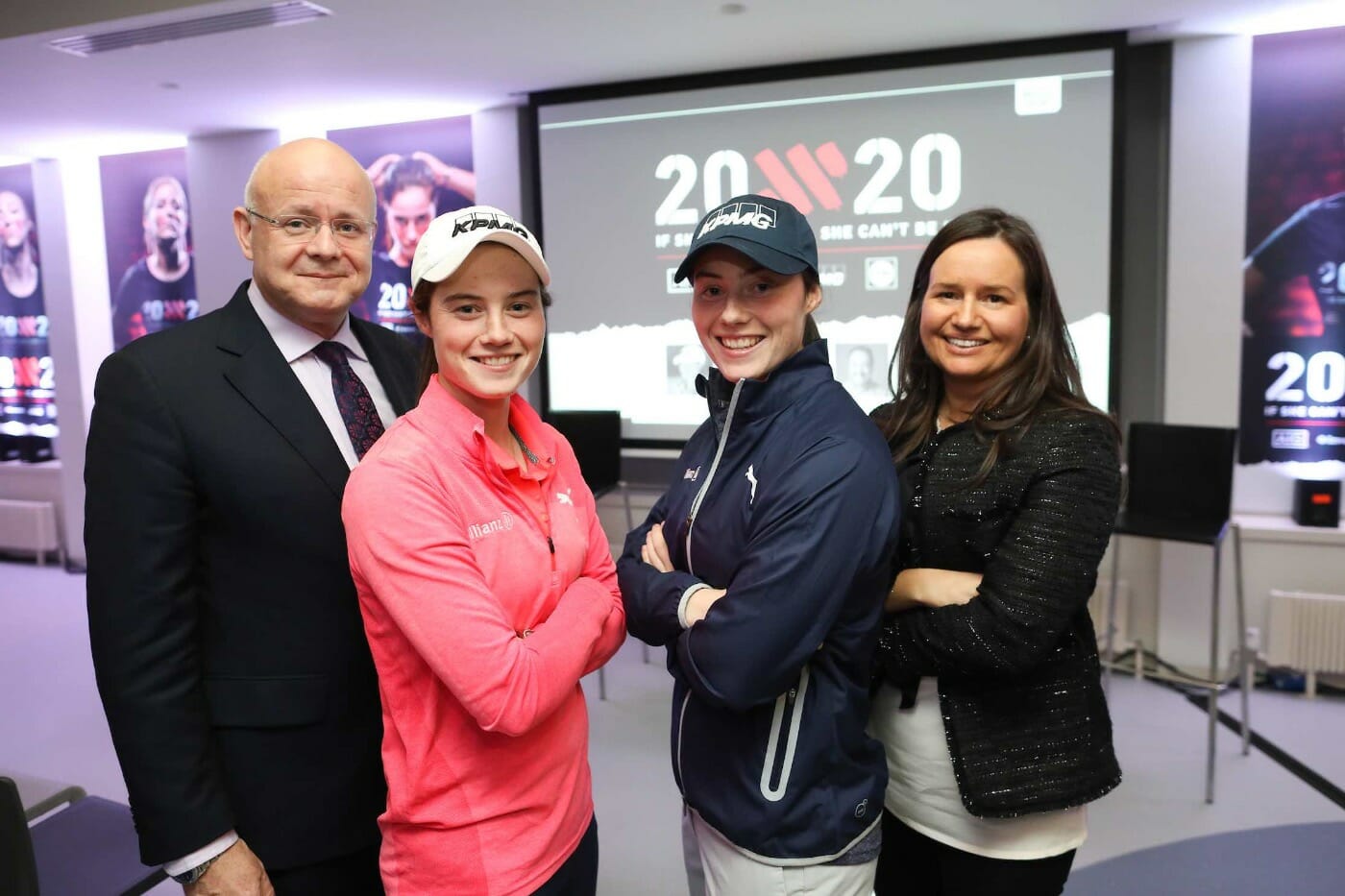 With Lisa & Leona Maguire getting their bids for Ladies European Tour membership underway at Pre-Qualifying Q-School in Morocco and following news that for the first time since 2008, the Irish Ladies Golf Union has this year noted a rise in membership figures of both women and junior girls, KPMG, a long-time supporter of the game of golf in Ireland, held a panel discussion focussed on the 20×20 initiative that was launched in Ireland in October.

A number of sporting influencers, including campaign ambassadors, Leona and Lisa Maguire gathered to talk all things 20×20, a programme aimed at increasing participation numbers amongst women in sport in Ireland by 20% within two years’ time.

It’s no secret that for a long time, the game of golf in Ireland was a particularly male dominated sport, but given the work of the likes of the ILGU, the Confederation of Golf in Ireland, Women’s Get into Golf and interactive programmes such as Golf4Girls4Life, there’s undoubtedly been a shift in that dynamic of late and the times they are a changing.

Currently, with 36,234 adult members and 3,619 girls (39,853), membership has increased by 1% since 2017 and speaking at the panel talk moderated by RTE’s Joanne Cantwell, Emer McGrath of KPMG has vowed that the company will remain right behind the 20×20 initiative that aims to increase these numbers across every aspect of female sporting involvement in Ireland.

“At KPMG, we invest in young talented people,” said McGrath.“I’m the mother of two young girls and I am personally committed to this and to seeing a cultural shift in our society where girls have a visible female role model in their sporting lives and as they grow up it will be the norm and not the exception.

Indeed the brainchild of the Federation of Irish Sport hopes to increase the involvement of women in sport across the board by 2020, with three target areas being of particular focus- attendance, participation and media coverage.

The campaign was launched at the Google Foundry in Dublin and will be championed by Ireland’s National Governing Bodies of Sport and Local Sports Partnerships, and is being supported by KPMG amongst other sponsors.

For 20×20 co-founder, Sarah Colgan, the campaign is being run with equality as its core message.

“It’s about showing our daughters that they are part of a society where they are seen as being equally worthy of our attention,” said Colgan.

“There is this unconscious bias amongst all of us in terms of how we’re going to push our daughters forward versus our sons when it comes to sport.”

Presenter Joanne Cantwell, who is no stranger to the male dominated coverage that sport receives through her work on RTE, was unsurprisingly in full agreement having come across some ludicrous claims that have seen women’s sport fall behind men’s in years gone by.

“You hear all these arguments all the time:“People don’t want to watch it”or “it’s not as good, the quality isn’t as good”and that’s because the playing pool it’s so, so, so, so much smaller because girls when they’re going off – in general, not all of them-but a lot of them simply aren’t encouraged to play sport in the same way that boys do,” Cantwell said.

For Cavan’s Leona Maguire, a prodigious golfing talent in her own right, she was quick to dismiss the notion that the talent amongst the boys surpassed that of the female game, in golfing terms at least.

“Yeah, maybe the men hit the ball further but the ladies’ short games are better,” she said, while sister Lisa believes the talent is there, it just needs a spotlight to shine upon it to enlighten the world.

“There’s people out there we just kind of need to kind of get them on the front of papers. We need to get them on the news and show people how great they are,” said Lisa.

For Irish Times Sports Editor, Malachy Logan, he believes the balance of power is already shifting and pointed to some of Ireland’s standout sporting moments of 2018 to highlight that it’s no longer a man’s world when it comes to Ireland’s sporting arena.

“I think that the awareness is far greater now,” insisted Logan. “I’m not concentrating on the core sports of Gaelic football or soccer or rugby, look at say the likes ofRachel Blackwell: one of the great stories of the year.

“Look at the hockey story during the summer. Most people havenever watched the hockey match in their lives and all of a sudden they were engrossed.

“All these stories are out there and they don’t get a profile unless you dedicate a space to them.”

The common theme on the night centred around making noise with the campaign hoping that everybody, by simply pledging one small action, can help the 20×20 initiative reach its target and beyond.

Further to the stars of sport lending their time to the initiative, clubs, universities, schools, leisure centres, community groups and the general public are being asked to pledge just one thing to show their support by doing anything that can accelerate progress for women’s sport in Ireland.