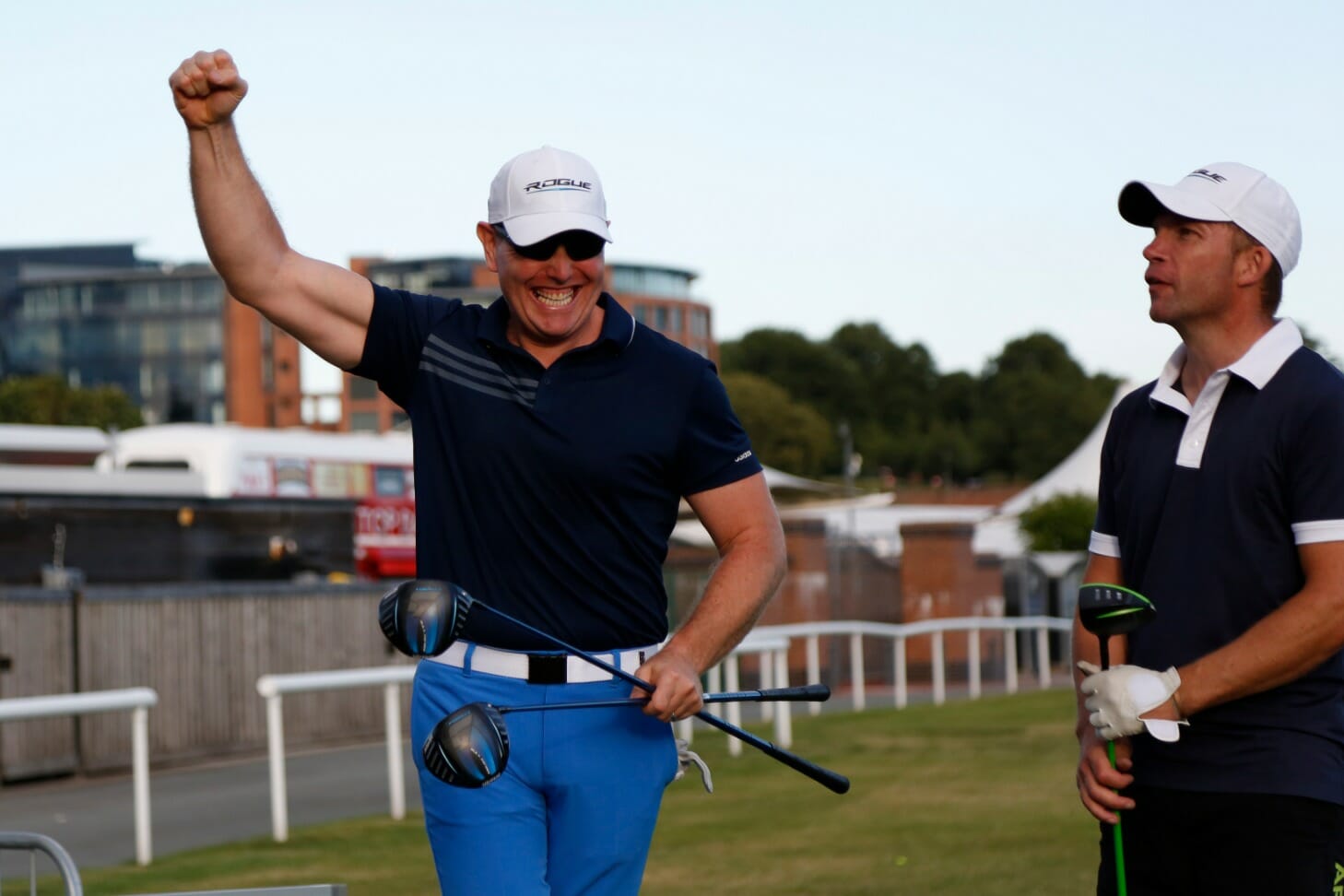 The Over 45’s saw one man dominate proceedings from start to finish. William Hunt Tyrell, from Gorey led the way from the seeding round, hitting consistently long throughout. He met a tough challenge in the semi-finals against 2015 champion Steve Kent who took him to a third set before taking on Gavin Beddow in the final.
The big Irishman returned to the championship after the disappointment of hitting 413 yards last year but not finding enough consistency in his game. He said, “It’s absolutely brilliant. After last year’s finals I’ve focussed on training hard 5 days a week. I took it serious, got some help from Long Drive coach Lee Cox and left no stone unturned.”

And that hard work paid off when he took the first set with a drive of 354 yards. But he was then reigned back in through Gavin’s consistent hitting in the second set to take it to the decider. William remained composed though, and in a marked change from 2017, sent out a series of enormous hits to take the final set and the title.

After the winning set he confessed to his inspiration in those final moments, “I wanted it so much this time after last year. I can see my girls, their faces, and they’re saying ‘get the cup daddy, so we can put the chocolate in it!’”

William now progresses to the World Championships where he feels he has unfinished business, commenting, “I’ll take a week off now and then focus on the World Championships. I was there in 2001 and in 2004 when I hit one of the best balls on the day but the consistency wasn’t good.
Now working with Lee Cox, he’s given me the nuts and bolts to keep it consistent. I hope to do well. I’m not afraid of the stage. Another month of training in consistency and technique and I hope to do well out there representing American Golf. I’m sure we’ll enjoy tonight first!”

In their first year of sponsorship of the event Callaway have been integral to its success and had a real boost when they saw the competitors take to the stage, as Nathan Dennis, Retail Marketing Manager at Callaway Golf explains, “We’re delighted to have been the sponsors of the American Golf U.K. Long Drive Championship and even more so to see so many players using Callaway Jailbreak technology to unlock their distance potential was hugely satisfying.”

In its fourth year, the American Golf U.K. Long Drive Championship has established itself as the premier Long Drive Championship in Europe, but while the best from the professional ranks flew in to take part in the qualification process at American Golf stores, that was not the most satisfying aspect for Matt Bacon, Head of Events at American Golf, “We’ve watched this event grow in stature and I can’t quite believe the quality of competitors who fly in for qualifying and then for the finals.

Keep an eye out for all three categories when they are shown on Sky Sports in October this year. The American Golf U.K. Long Drive Championship is part of American Golf’s drive to get more people hitting more balls, more often. And this year, those Callaway balls have been going a very long way!