Following in the footsteps of Tour pros? Good luck… 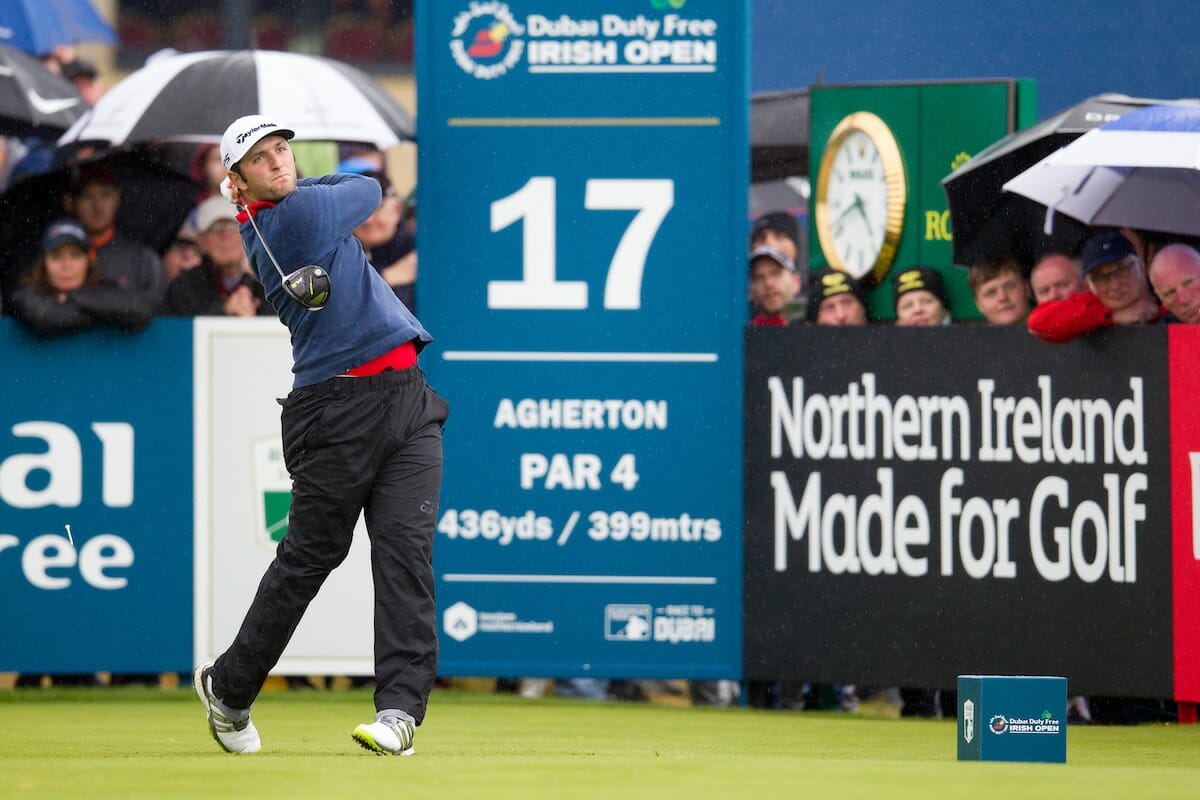 Looking to recreate some of the memorable Irish Open shots from this year IGM’s Mark McGowan headed to Portstewart to try his luck.

Exactly when it began, I’m not sure, but I do know when I first became aware of it. It was early afternoon on Friday in Portstewart, and having spent most of Thursday and Friday morning following the marquee groups, I then latched on to the group of Paul Lawrie, Gregory Havret and Damien Perrier for a few holes. Although featuring a major champion in Lawrie, and a US Open Runner-Up in Havret, with Rory McIlroy, Jon Rahm and Hideki Matsuyama a few groups in front, numbers were relatively sparse following this trio.

The great thing about small crowds is that you can get really close to the players, and as they stood on the 17th tee – they started on the 10th – I was so close that I could actually hear the conversations with their caddies. Now, my French isn’t great, but I’ve a decent grip on Scottish, so I could clearly make out Lawrie’s plans. “Start it left side of the mound – slight fade” “Yeah”. Step up, driver out and yep, just left of the mound, slight fade. “Good shot,” I said. Again, I had no idea what Havret and Perrier planned with their caddies, but seeing as they both ripped drives right down the centre, let’s give them the benefit of the doubt and say that it was exactly as planned as well. Again, I offered a not-so-original “good shot” to each.

Here is where I have my mini epiphany, walking along the ropes heading down 17. “Good shot?” This hole is index two on the card, 440 yards from the back tees, and these guys with a handful of followers have reduced it to a drive and a wedge? “Good shot?” If I hit a drive like that I’d still be talking about it.

Somewhere between Thursday morning and Friday afternoon, I had become numb to the quality of play, and I’d just realised it. These guys are so good; it seems that anything less than exceptional is not acceptable. Havret stuck one into 12 feet and made birdie, Lawrie and Perrier both made safe pars. Havret shot 74-74, Lawrie 73-69, Perrier 72-69 for -3. All three missed the cut.

It’s a tough league to be in, no doubt, but exactly how far ahead of the average golfer are they? Well, I happen to be one such average golfer, and playing Portstewart from the back tees would be a pretty good way to find out.

And so here I was, a few weeks after the Irish Open with an early morning tee-time at Portstewart hoping to catch the same favourable conditions that saw Jon Rahm go -24 for 72 holes. Having the experience of walking the course a few weeks previously, and watching the pros plot their way around, I had formulated a plan.

The first at Portstewart is breath-taking. From an elevated tee, with the Atlantic Ocean and Portstewart strand over the dunes to the right, and the hills of Donegal in the distance, few opening holes can match it for beauty. As for difficulty, however, most of the pros I’d watched had hit an iron to the corner of the dogleg, leaving a mid to short iron into the green. I’d seen several birdies, and only one bogey, and even that was a disappointing three-putt from the back edge.

My intentions (as agreed with my imaginary caddy a-la Paul Lawrie) was to hit 3-wood to the corner, but those plans quickly changed as I stood on the tee and felt the brunt of the strong easterly wind hitting me in the face. I pulled driver, and I pulled the drive into the heavy rough a long way short of the corner. Having just about given up hope of finding it, I stumbled across it buried in what can only be described as a horrendous lie. Three hacks later I was in the fairway, an 8 iron that was slightly long and slightly left, a chip and two putts later and I was in for a snowman.

So much for intentions…

To salvage some dignity, I parred two and three (both playing in cross-winds) before coming to the par-five fourth. Although I was playing from the blue tees, the green keepers had kindly forgotten about the tee box hidden up at the very back of the fourth. I checked the yardage, and discovered the hole was 45 yards longer from back there. Now, I’m not a short hitter and I crushed one down the fourth. At least, I thought I had. I then hit a great 3-wood down the fairway and left myself 77 yards to the centre. Now, straight into the wind this may have been, but I’d watched Graeme McDowell go for the green with an iron after driving from the back tee, and McDowell is far from long by tour standards. To echo Bobby Jones, these guys play a game with which mere mortals are not familiar.

I won’t bore you with the rest of the details, but it’s safe to say that the course came out on top, and no professional need anxiously peer over
their shoulder.

As links golf and wind generally come hand-in-hand, and given the relatively benign conditions faced at the Irish Open this year, it’s highly unlikely that another 10 opens staged at Portstewart would produce another winning score of -24. But we would see -10s, -12s, maybe even better.