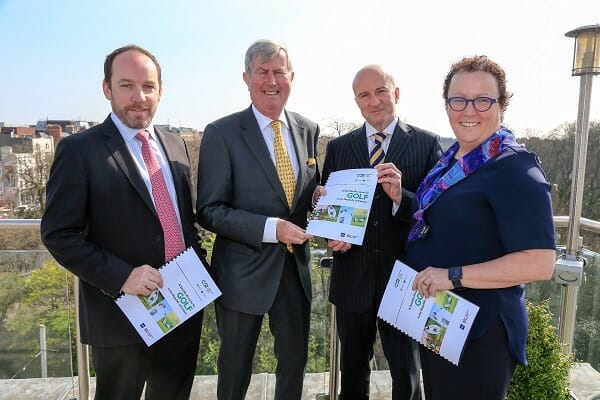 Consumer spending on golf in the Republic of Ireland alone is now worth €379m million annually, according to a new report commissioned by the Confederation of Golf in Ireland (CGI) and The R&A.

A similar report was published in 2016, which detailed the contribution golf made to the economy of the United Kingdom while this report considers the impact of golf in the Republic of Ireland. These figures when taken in conjunction with the previous findings, provide an overall figure for the island of Ireland.

Some of the headline statistics show;

Carried out by the Sport Industry Research Centre at Sheffield Hallam University, the research also shows that 9,030 people are directly employed within the golf sector on the island of Ireland, with 6,800 of these in the Republic. Golf clubs are the most significant employers (34%), followed by the golf equipment and sportswear sectors (13%) and the tourism and accommodation industries (11%).

These employment levels equate to the golf industry being responsible for 0.3% of total employment in the Republic of Ireland – the equivalent of one in 300 jobs.

Meanwhile, the Gross Value Added ** (GVA) of the golf industry in the Republic of Ireland was €202 million, which equates to 0.1% of the entire Irish economy. The major contributors to golf’s GVA are the activities of golf clubs, including food and beverage operations and recreational golf, at €89m (44%).

‘A Satellite Account for Golf in the Republic of Ireland’ also found that:

•           Based on a combination of the participation and club membership data, it can be concluded that 4.7% of the adult population in the Republic of Ireland are members of a golf club. This is nearly one in every 20 adults, and compares favourably with England where the corresponding figure is close to one in 100 adults

•           Golf contributes €93 million to the public sector in corporation tax and VAT. Given the size of the golf economy and the relatively low corporation tax rate, this is a significant contribution to public finances

Redmond O’Donoghue, Chairman of the Confederation of Golf in Ireland, said: “We commissioned this piece of research because, for too long, we lacked specificity with regard to the economic impact that our sport makes in the wider Irish community. This study proves that golf plays a far more important role in our economy than many would have expected. We plan to use this study to underpin our arguments for greater support for the game of golf from both the public and the private sectors. It is quite clear now that golf, as well as being a healthy and enjoyable activity, makes a significant contribution to the economy ”

Professor Simon Shibli, Head of SIRC and author of the report, says: “Golf in the Republic of Ireland is more than just a sport.  Our research demonstrates that it makes a measurable contribution to the nation’s economy and that golf clubs play an important role in the social fabric of their local communities.  The current macro-economic conditions in the Republic of Ireland present an ideal opportunity for the nation’s golf industry to grow in future years.”

Duncan Weir, Executive Director – Golf Development at The R&A said: “This is an important piece of research which highlights the substantial contribution that golf makes to the economy of the Republic of Ireland. Clearly golf’s popularity from a tourism and club perspective, as well as the quality and range of courses available, are key factors in this success but we should remember that golf is also an important provider of employment. The report will give us a useful benchmark from which to measure the sport’s growth in future.”

If you want to read the report in full here is the link: https://goo.gl/itTGrk