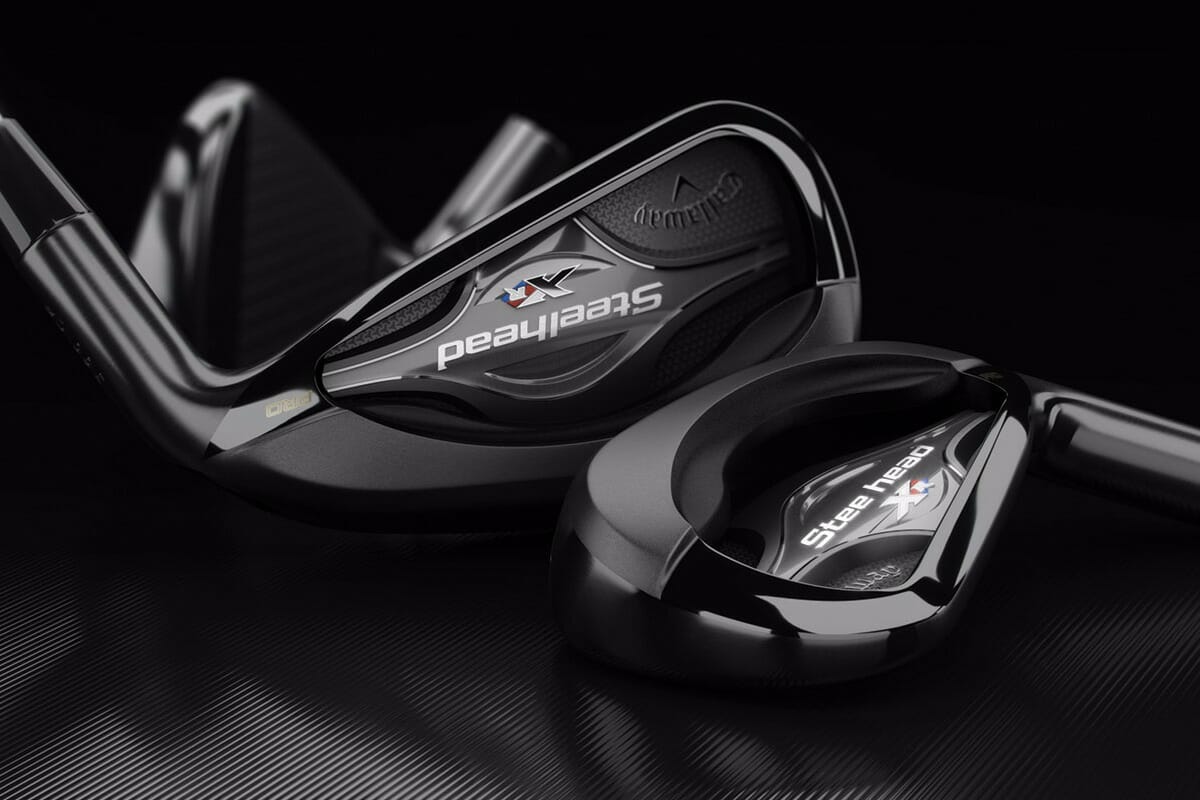 Steelhead Pro Irons are the newest addition to the XR family and available to buy from today.

Steelhead Pro combine a beautiful compact shape with playability and control in a sleek black PVD finish. The speed and distance of Steelhead Pro Irons are based on our next-generation 360 Face Cup™ technology, which allows the edges of the ultra-thin face to freely flex and release at impact with greater efficiency, adding ball speed that promotes more distance, especially on off-center hits.
More speed and distance on mis-hits is made possible by the modern Hollow Bore-Thru hosel design, which allowed Callaway engineers to remove weight from the hosel and reposition it in strategic areas within the head to: 1) Increase MOI for more forgiveness on mis-hits. 2) Precisely position the CG strategically in the long, middle and short irons. Steelhead Pro long-irons feature a low and far-back CG for consistent playability and long carry. Middle-irons have an exceptionally low and mid-back CG to promote consistent launch and workability.

Short-irons have a low an d mid CG to make them easier to promote lower, high-spinning shots ideal for attacking the pin. Great feel and sound come from our new steel-infused polyurethane layer positioned low in the head, behind the lower portion of the face. In addition to absorbing unwanted impact vibration to promote a remarkably satisfying sound and feel at impact, it also helps lower the CG to promote faster ball speed and higher launch characteristics for more distance. Put it all together and you have a player’s iron that delivers the finest combination of speed, forgiveness, distance and shot-shaping control. For a brand with Callaway’s history of innovation and performance, that’s saying a lot.

Control Features
More Forgiveness from Hollow Bore-Thru Hosel Design Hollow Bore-Thru hosel design saves weight that’s repositioned in strategic places in the head to create more forgiveness. More Control and Distance from Progressive Center of Gravity Positioning The CG is positioned strategically in each iron to promote consistent launch and long carry in the long-irons, great workability and control in the middle-irons, and lower and high-spinning shots in the short-irons.

Refined Shaping and Finish
The head shape is more compact, with a thinner topline and narrower sole width in a high-performance player’s iron. And the sleek black PVD finish gives Steelhead Pro an unforgettable look.
Custom Options
A wide array of premium aftermarket steel and graphite shafts and aftermarket grips available.
Available from March 17th 2017 at an RRP of €879 for 7 iron set.

Glasson primed to tackle the challenges presented by Covid-19

McGinley insists it’s too soon to compare Morikawa to Woods

"Let's not jump to any conclusions that this is the new Tiger Woods though, and that he is going to run off and win 15, 16 major championships. Let's give him a bit of time"
Read more
Tour News

Presidents Cup to return to Royal Montreal in 2024

Royal Montreal will become only the second international venue to host the Presidents Cup more than once, joining Australia's Royal Melbourne. Have you played either track?
Read more