TaylorMade Golf have announced today the release of the all-new M CGB irons completing their 2018 iron line up.

Featuring consistently high COR throughout the entire set, an extremely low and back center of gravity and many of the company’s most prominent iron performance technologies, M CGB delivers powerful and forgiving playability in their fastest iron set (4-PW) to date, Its like having a bag full of drivers !

“The CGB name is iconic and represents some of the longest and most forgiving irons we’ve ever created at TaylorMade. The concept has now been re-created with all our latest technology to bring never-before-seen performance to golfers of all skill levels.”- Tomo Bystedt, Senior Director, Product Creation, Irons

With the introduction of M CGB, TaylorMade enhances the M Irons family with a new super game-improvement option. In each iron throughout the set, golfers will discover the signature technologies that made both the M1 and M2 irons so successful — Speed Pocket, Face Slots, 360° undercut, Inverted Cone — in addition to new technologies that launch M CGB to the next level of performance. These proven technologies are combined with a clubhead designed with high-MOI using Tungsten weighting and an ultra-thin leading edge to deliver full-face forgiveness like never before.

By complementing the low CG position with strategically adjusted lofts, TaylorMade’s engineers have produced optimal distance gapping emphasizing higher peak height throughout the set. In fact, M CGB achieves the highest peak trajectory of any TaylorMade iron since 2012 (including the 2017 M2), allowing golfers of all swing speeds to produce higher, softer landing shots.

To further differentiate M CGB from the competitive set, TaylorMade’s engineers deviated from standard practices to advance their performance capabilities. While traditional game-improvement irons feature a progressive COR that reaches closer to the max in longer irons, M CGB utilizes a consistent COR model with every iron capping out at a substantially high COR limit. A constant COR is achieved using consistently thin face thicknesses and utilizing Face Slots and Speed Pocket technology all the way through to the PW. This produces optimized launch conditions throughout the set, regardless of which iron in the set the golfer is playing.

To deliver increased draw-bias and tighter overall dispersion, the Inverted Cone has been redesigned and relocated to a slightly off-center position (closer to the toe). Additionally, a newly redesigned Speed Pocket provides for flexibility for the generation of faster ball speed. Last but not least, M CGB irons utilize TaylorMade’s Geocoustic technologies to create a fine-tuned sound and feel. The precision-shaped head geometry combines with an ultra-stiff 3D sound management badge and a soft Hybrar damper to reduce unwanted vibrations and produce superior sound and feel.

Taking decades worth of irons innovations and uniting them with new technologies, M CGB delivers a complete set of high-performance irons that are long, high, forgiving, and incredibly easy to hit.

Pricing and Availability
Available at retail on 16th October, the M CGB irons will be offered in a 7 piece set, with Nippon NS Pro 840 steel shafts €1199 or UST Recoil 460 ES graphite shafts €1,399 with a TaylorMade Dual Feel grip. Additionally, a variety of custom shaft and grip options are also available. 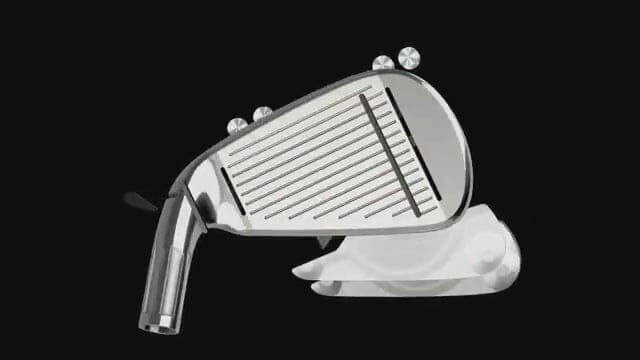