Wilson has always been one of the most iconic club manufacturers, I would bet most golfers over 40 have a gamed a Wilson club of some description in their time and it’s a brand that has been a staple in bags for close to a century.

Well, for 2023 Wilson is bringing us back to the future, back 70 years to be exact as they resurrect an iconic name from their back catalogue with Dynapower as they re-introduce one of the most successful franchises in the game’s history to another generation of golfers.

Revitalising the Dyna-Powered legacy that revolutionised the game with game-changing weight distribution on its iron sets from 1956 onwards, the rebirth of the famous franchise as a modern classic includes the first Wilson Tour spec fully adjustable driver and distance inspired irons, plus fairway woods and hybrids.

The new Dynapower Driver is the most adjustable driver ever created by Wilson and available in both Carbon and Titanium head options.

Employing advanced Artificial Intelligence methods, thousands of clubhead aesthetics were analysed using the same computer design process that produced the award-winning Wilson D9 wood range. Simulating a wide variety of data variations to produce the most effective design possible, it resulted in the deployment of exclusive PKR2 Technology on both Carbon and Titanium heads, providing a dynamic face thickness optimised over an extended area of the clubface for fast ball speeds and maximum forgiveness on off-centre hits. 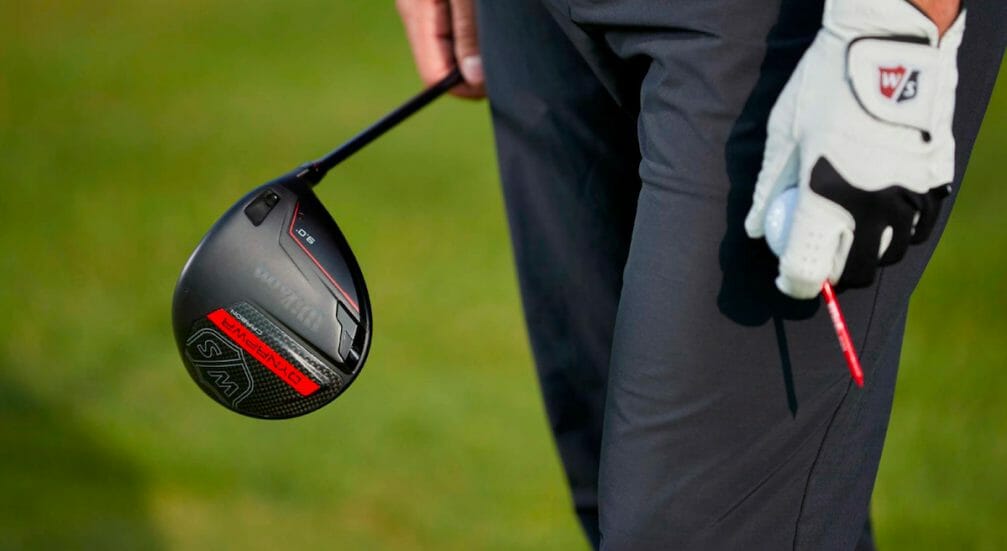 A new dynamic 6-way adjustable hosel enables fitters to make quick shaft changes, while golfers can benefit from easy one-click launch and spin adjustments.
“Research shows golfers hit 25% more GIR from the fairway, while around 60% of average 10-handicappers hit the green from 125-150 yards out, so that’s why the powerful new Dynapower Driver offers many golfers the best opportunity to post better scores,” said Jon Pergande, Manager of Wilson Golf Club Innovation based in Chicago.

With two heads to choose from, which Dynapower driver to choose?

Dynapower Carbon
The Dynapower Carbon driver was made for golfers who want a low-spin option with a low-to-mid launch that allows players to hit both draws and fades. It has a large carbon fibre crown that reduces weight on the club’s top and lowers the centre of gravity, along with a carbon fibre panel in the toe portion of the sole.

A 12-gram weight in the back of the head increases forgiveness, and the weight saved using carbon fibre in the crown and sole has been repositioned in the front of the head, which shifts the centre of gravity forward to increase ball speed and reduce spin. Dynapower Carbon produces about 250rpm less spin than the Dynapower Titanium and will be more suited to a better player looking to dial in performance.

Dynapower Titanium
The Dynapower Titanium driver is an all-titanium construction with a 16-gram weight in the back of the head that pulls the centre of gravity down and away from the hitting area. That should increase spin, help produce a higher launch for more carry distance and boost the MOI for more stability and forgiveness. The titanium model has a slight draw bias for added help for golfers who have a tendency to slice off the tee.

Our Verdict
They may not have the marketing or brand pulling power of the new offerings from TaylorMade of Callaway but if you ignore the Dynapower driver you are really missing a trick. The advance in technology and performance from D9 to Dynapower is undoubtably the biggest evolution from last year’s product offerings we have seen this year. So much so, you will 100% see a Wilson Dynapower Carbon driver gamed on both the PGA and DP World Tour this year, it’s that good. Finally, we are in the middle of a cost of living crisis and if you are going to dig deep in 2023 and invest in a new driver, Dynapower won’t hit you as hard in the pocket either.