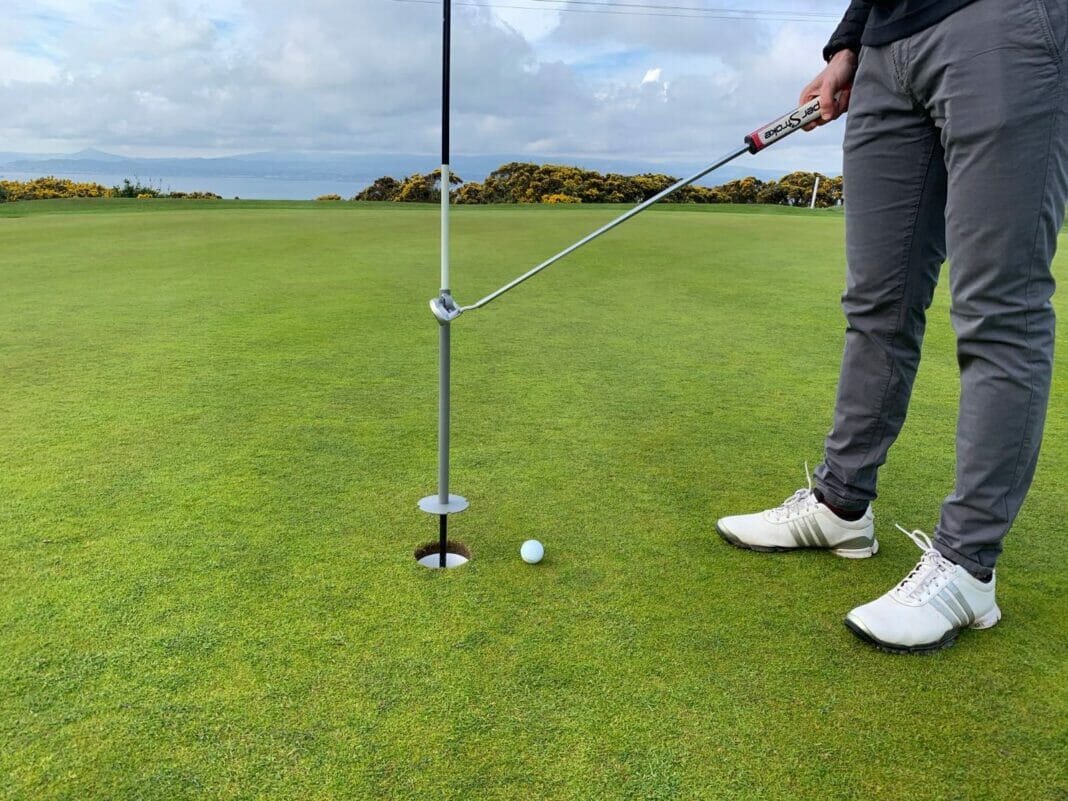 While we’re all eagerly awaiting the announcement of when golf will get back on the agenda, exactly how we’ll be able to return and what restrictions we will face remain up for debate.

How golf will all be administered and what golf clubs will have to do to be permitted to open the course is also a matter of speculation right now, however, some things are certain: We will have to social distance, which shouldn’t be a problem for most golfers. Clubhouses will be restricted in terms of people and facilities and we will have to avoid touching things on the golf course such as rakes and flags.

Even in crisis situations, there are always some winners and companies who can pivot their business to deliver on demand will come out of this in a strong position. And it would seem that one such Irish company is Putt Buddy. Founded by Conor O’Boyle and his business partner, who operate car sales technology company, Sweep, catering for car dealers in Ireland, but with some time on their hands at the moment they have used their love of golf to develop a new product called Putt Buddy.

It’s an Irish company, run by Irish golfers, who have enlisted the help of Irish manufacturers to produce a stainless steel product that allows the ball to be removed from the hole without touching the flagstick.

The result of the design is a product that slips down over the pin (or from the bottom up if you remove the ferrule) and does not impede the ball entering the hole. It has a diameter of 18mm, which complies with R&A and USGA guidelines of the diameter of a flagstick being no more than 19mm and has no cushioning effect.

As well as being a product that is extremely durable, what they have produced is also aesthetically good looking. It measures 16 inches in height and has a small lever, that has a rubber slip on to avoid any metal on metal when you lift it with your putter.

Boyle says, “We wanted to ensure that the product was durable and long lasting while also making it look good on the course and not like a crazy invention sitting at the base of each hole.

“We’re trying to keep it Irish and Putt Buddy is being manufactured in Ireland, in a steel fabricators in Drogheda. This was important for us even though the costs might be higher than shipping to China or Eastern Europe for manufacture.”

With very little in the way of promotion, in fact it was only launched this week, the company has had enquiries from more than 70 golf clubs already and from watching it in action, it looks like something we may be seeing a lot more of when we get back to the course.

Details on the product, which in production is finished in black gloss, can be found on www.PuttBuddy.ie and the product is priced at €349+VAT for 18 holes.

McIlroy not alone in falling foul of Winged Foot

In the year of the Staycation, golf enthusiasts need look no further than this three-day tournament that finishes with a flourish on the fairways of Royal County Down
Read more
Tour News

Trailing Patrick Reed by just one, Bryson sensed a cold front moving into Winged Foot early on Thursday evening so he headed back to the course for a late-night practice session
Read more
Tour News