Turning Japanese – a visit to the heart of Mizuno operations 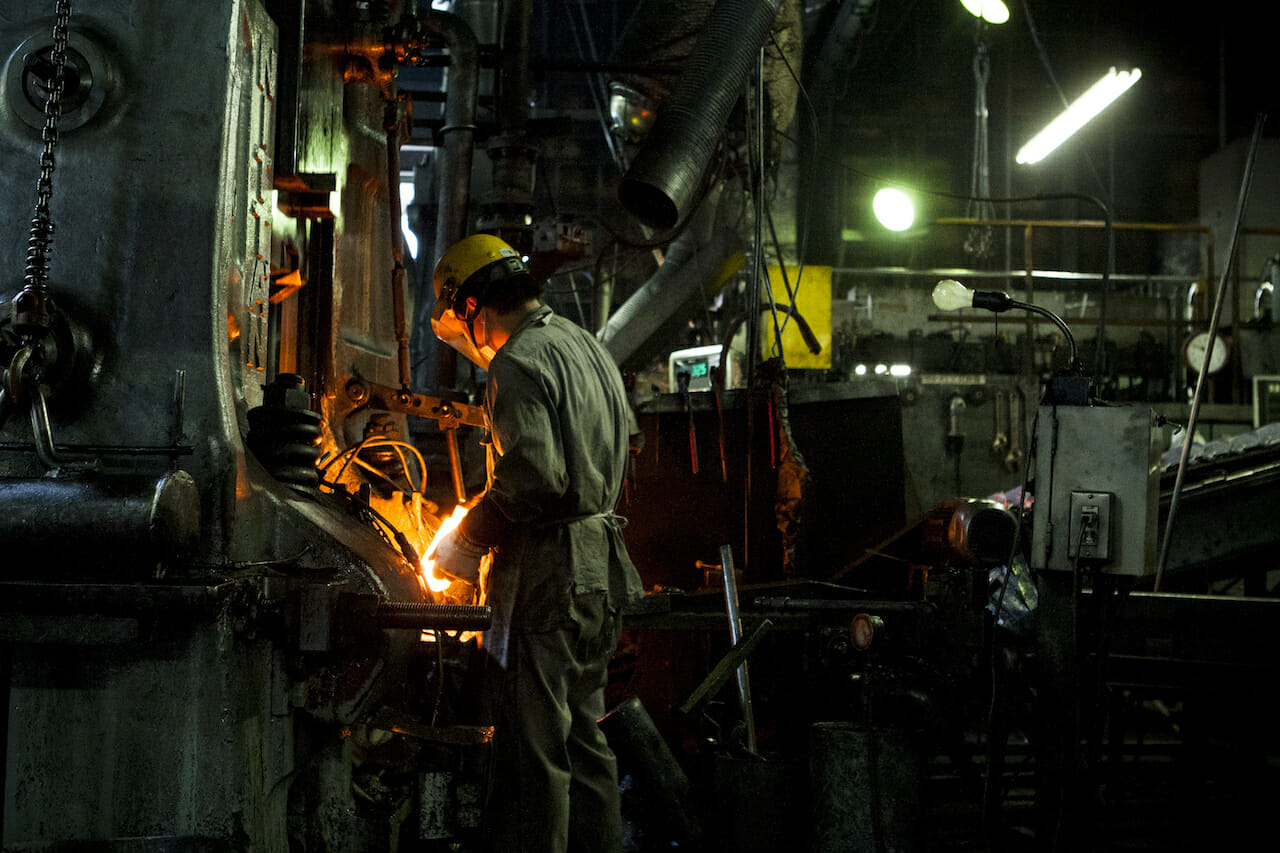 Have you found a fence to sit on? Asks Kevin Markham #covidireland #staysafe
Read more
Columns

At 8pm on Thursday around Ireland, you could feel the love as people showed their appreciation for our frontline workers. Let's make this atmosphere a reality in our virtual world too #staysafe #covid19
Read more

A short time ago Irish Golfer Magazine’s Equipment & Technology Consultant, Derek Murray from Fore Golf, got the chance to visit the heart of Mizuno’s operations in Japan to see the new MP-18’s coming off the line and it was an eye-opening experience.

At Fore Golf, we have been involved with Mizuno and their growth since the early 1990s. Back in the day, I was introduced to the brand by my then boss, Ernie Jones, who was the Pro at the K Club. He played with Mizuno, and I’ve been a fan of the brand ever since, their irons specifically.  They are known as an irons company although they have started to produce some cool wedges as well as fairway woods, hybrids and drivers. But my love affair with Mizuno began when I first saw the TP9s back in the 90s.

I was delighted therefore to be invited for Irish Golfer Magazine on a three-day trip to Japan to visit Mizuno’s main headquarters in Osaka, west of Tokyo, where the Mizuno Tower is close to 40 storeys tall. It encompasses all of their sporting businesses, including baseball, tennis and even the Olympics.

As Fore Golf is a family business I was very privileged to be able to bring my dad Don with me and we learned how Mizuno’s involvement in sport began. They’ve been around for hundreds of years and they have a special timeline video room at their HQ, which is basically a testament to sport. You can take blocks off the wall, put them down on this screen and you are told about that specific time and history in Mizuno. It is fascinating stuff.

After a visit to ‘The Tower’ we headed to Hiroshima on the Bullet Train, where they produce the steel for the clubheads.

This is where you’ll find Mizuno’s steel foundry. Roughly 80 per cent of the foundry’s capacity is used to produce Mizuno irons. The reason for this is that Mizuno insists on a very specific type of steel. They produce this billet steel which is like a round sausage. It is about 7 or 8 inches long and these cylinders are then pressed in to a mould… as opposed to being poured which you’d see in typical club making.

Enormous amounts of pressure and energy are applied by five tonne machines which are 20 to 25 feet high. The pounding is phenomenal: it reverberates through the ground under your feet. The reason for this specific technique is that clubheads shaped from a single cylinder never change their molecular structure. The grain in the steel stays absolutely pure throughout the clubhead’s manufacture. This is so important in terms of the iron’s production as it keeps the feel of the iron very very consistent. In total, they produce about 500,000 pieces a year here. 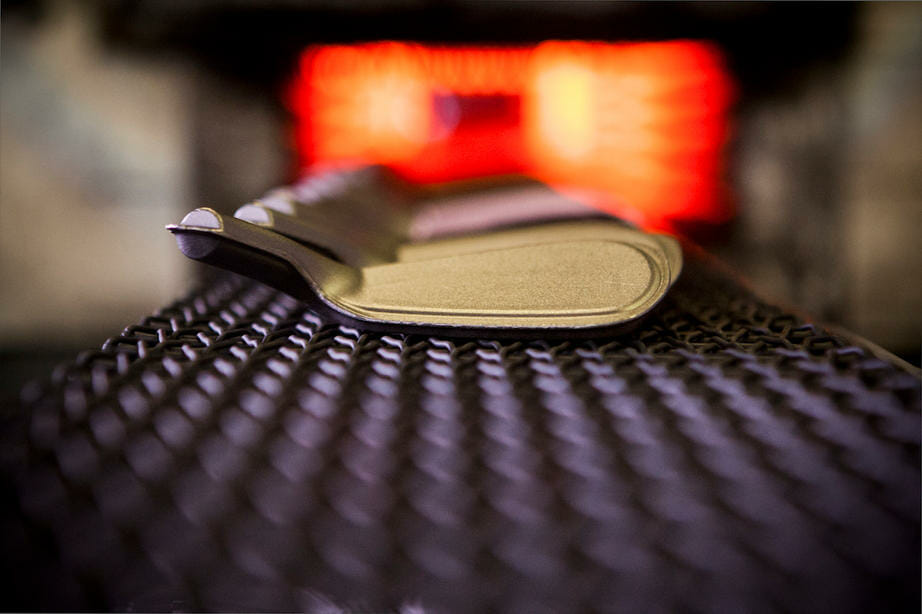 Once we had seen how the steel was made, we went through the different processes. For a lot of it we were not allowed to take photographs or record anything. We weren’t even allowed to ask too many questions because so much of what they do is carefully protected. The attention to detail is phenomenal and it is little surprise they want to protect their processes and what makes them so special.

We were seeing a lot in a short amount of time. For Dad and me it was truly fascinating. We have both been in custom-fitting for so long but this was going ever deeper into the club making process. It opened our eyes to how Mizuno works and demonstrates the value and integrity that Mizuno puts into the brand… but there was so much more to come.

We travelled back to Osaka, and day three of our trip took us to the Yoro Technics factory. This was the place we really wanted to see because this is where the serious craftsmanship takes place, where they do a lot of their R & D testing and where they produce their Japanese-only products, which is why it is called Yoro. Yoro is the highest level of Mizuno iron production. This factory also produces their premium end equipment for baseball. You might not think that baseball bats require such attention to detail but the bats produced here are hand turned by their master craftsmen. It is also the place where the Meisters work. These guys are the Masters of club making for Mizuno: a Meister is a person who can build a set of clubs from blocks of steel. Literally. They will actually take a block of steel and they will grind it and shape it into a single iron head. Imagine doing that from single blocks of steel for an entire set of irons. You might ask why… and I did. The Meister told me he might not have a mould that matches the exact shape a player requires, so he grinds it from scratch instead. Each club is unique.

No other golf company does this as far as I know.

While we were there we met with Turbo, the Head Meister, who looked after Nick Faldo back in the day. He still does a lot of work for some Tour players. He is the most senior Meister at the factory and Meisters are treated with the utmost respect. It can take 20 to 30 years to become a Meister and they are revered. It is not hard to see why. They’re like Samurai in that way. They are simply the best at what they do and while many different people work in the factory building clubs, the Meisters and the Master Craftsmen occupy a separate section where they make the clubs from scratch. Turbo showed us heads that he had forged by hand and he then demonstrated how he makes and bends the iron to the way he wants. It was amazing to watch.

He was very aware of my Dad’s presence and, throughout the trip, the Japanese culture impressed me so much. I love the respect they show to each other and to visitors. They have an inate respect for themselves and their country and they look after each other very well… particularly the elderly. There is a heirachy which even operates when you get into a lift – you have to stand in a certain place and it rotates based on heirachy: the youngest person stands near the buttons and operates them; and the most senior person stands in the back right of the lift and they enter and exit on that hierarchy. You are always watching who is the eldest and who goes where. So they were very aware of my Dad on this trip, giving him the deepest bows as a sign of respect for his age. Towards the end of the Yoro factory tour they called us into a meeting room and presented my Dad with his Meister apron from Mizuno. This was a huge moment both for him and for me because we hadn’t expected it and because it was Turbo who presented it. Turbo commented that my Dad had Meister blood. It is, I think, the first time that a Westerner has been honoured in such a way. We were both incredibly moved. Dad may not have reached full Mizuno Meister level but he was certainly greeted as being one of their own. If you come out to Fore Golf you’ll find dad wearing his Meister apron every day as he carries on making clubs.

We were then given a final tour of the factory where we saw some of the clubs that Mizuno have made down the years: cool products like the irons they made for the Masters; irons that have won numerous Major Championships; and clubs that are used by some of the best Tour players in the world.

We saw their R & D and how they research products, test it and build it. And yet, within Yoro, things can be done quite differently because it is a step up in terms of quality and that’s saying something. I was so impressed that I made enquiries and, as a consequence, Fore Golf is to become a Yoro-connected establishment. This means that we will be able to allow customers to design their irons in terms of their finish, where the logos are placed, where the numbers are placed, the offset and certain design qualities of the irons. The irons will then be built in the Yoro factory in Japan and shipped to us. It will be more expensive but then Fore Golf will be one of the first places outside Japan directly connected with Yoro as an outlet for these Mizuno products. That is serious quality, right there.

We finished our trip in Tokyo and flew home certainly more the wiser, certainly incredibly impressed by not only Mizuno and their processes but also by the different and extraordinary levels of work required to produce a club head. You can’t take short cuts – that much was made abundantly clear.

Perhaps I should point out that there are only four Meisters at Mizuno, so that indicates the level of respect shown for my dad by men on the other side of the world. To be recognised as being the best in the world at what we do is hugely rewarding for all of us. We are constantly learning in our world because we can never say we know everything. Our trip has given us a much higher respect for what goes into an actual club head… and a better understanding when we are talking to clients about what these clubs do.

Spring is in the air with Footjoy’s colourful SS20 collection

PowaKaddy is continuing to push the boundaries of ultra-compact, lightweight design with the introduction of the completely remodelled 2020 Compact range
Read more

“While everyone in our family is saddened at the loss of our home that was filled with so much laughter and incredible memories, we’re very blessed that everyone is safe and unharmed,” Love said
Read more
Columns

At 8pm on Thursday around Ireland, you could feel the love as people showed their appreciation for our frontline workers. Let's make this atmosphere a reality in our virtual world too #staysafe #covid19
Read more