Under Armour unveil "The Spieth One" shoe

Under Armour and Jordan Spieth launch a signature shoe

Last night Jordan Spieth embarked on his first-ever Global Tour with Under Armour. The 2015 PGA Tour Player of the Year will debut his first signature Under Armour golf shoe, the Spieth One, on a multi-country tour that kicked off in Tokyo, Japan followed by Seoul, South Korea, Los Angeles, USA and Mexico City, Mexico before the shoes’ global retail debut on March 1. Throughout the tour, Jordan will share his passion for the game of golf and his intense focus on the detail of his craft with fans around the world.

“I couldn’t be more excited to officially unveil my first signature shoe, the Spieth One, with Under Armour,” said Jordan Spieth.  “I worked closely with the Under Armour footwear team to design an innovative shoe that is grounded in the details of my game. The opportunity to unveil my signature shoe with the amazing fans here in Tokyo is extremely humbling and an experience I will never forget.”

The Spieth One is being introduced as engineered “Down to a Science;” a nod to the concentrated level of detail by which the shoe was designed and mirrors Jordan’s precise approach to his game on the course. Jordan worked in close collaboration with Under Armour to meticulously craft this clean, bold and innovative shoe that features a number of technical design elements that were dictated by Jordan and his game.
Technical Specifications of the Spieth One:

The Spieth One will not be available for purchase until March and will have an RRP of €190. 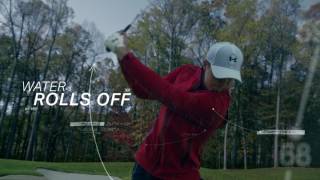