The new Mizuno CLK hybrids have been unveiled, featuring faster ball speeds, a low-spinning flight and versatility in a range of different lies.

Along with the new MP-18 irons and S18 wedges, Mizuno has launched its CLK hybrids. The new CLK Hybrid features an eight-way adjustable hosel, allowing it to be precisely tuned to fill the distance gap between the longest iron and shortest fairway wood.
Its amplified Shockwave Sole is said to deliver more energy for faster balls speeds and will also push weight lower and forward for a high, low-spinning flight.

The ultra-thin, durable 1770 Maraging steel face is designed to promote faster ball speeds while also granting Mizuno’s engineers the freedom to create a more stable clubhead. The club’s versatile playing profile means the CLK is equally at home from the fairway or tee.
“We all play our CLKs a little differently,” says Bill Price, Custom Fit Manager Mizuno.
“With faster ball speeds, we’ll tend to slot them in before a 3- or 4-iron. For mid and slow swing speeds, having two, three or even four CLKs in the bag becomes a great way to maintain some yardage gaps.” 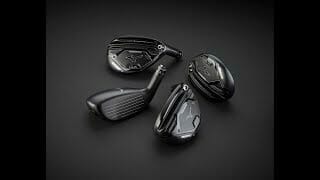