The golf ball market is certainly a crowded space these days, especially the mid-priced bracket that sit just below the more expensive premium tour balls.

Many brands have jumped on the “Tour” label bandwagon for their ball ranges that sit just below their most premium ball offering so you need to be very careful when buying in this category. Yes you will save a few Euro in the step down but there is no question some manufacturers try to confuse the consumer by putting the Tour stamp on non-premium product.

With the AD333 Tour however, Srixon have always been consistent with their performance attributes and tour grade materials used. Most notably a cast urethane cover. The biggest selling premium golf balls like Srixon’s own Z Star which is used by their Tour staff players all feature a urethane cover. Urethane is in essence a high-performance rubber coating that drastically improves the feel and spin performance of a golf ball. Compared to a ball with a ball with an ionomer or surlyn cover the performance characteristics are totally different as these materials are in essence a plastic cover not rubber.
You simply won’t get the same Tour performance with a ball that does not have a urethane cover.

Now in its third generation, with the new AD333 TOUR, Srixon has focused on developing a tour-caliber golf ball in a lower-compression design that helps moderate swing speed golfers achieve more distance on full shots, while maintaining the feel and green-side spin performance of its Z-STAR series offerings.

“The AD333 TOUR was designed primarily for good players with moderate swing speeds. The problem we identified is that these golfers aren’t optimising their performance by playing a high-compression tour ball because they aren’t able to compress it, so they end up sacrificing distance off the tee and with their irons,” said Michael Ross, Senior Product Manager for Golf Balls.

“These golfers don’t need to play a high-compression tour ball just so they have the excellent greenside spin performance that they’re used to. They would benefit greatly from playing a ball that offers the same great greenside performance but is easier to compress. That’s why we developed the lower-compression Srixon AD333 TOUR.” 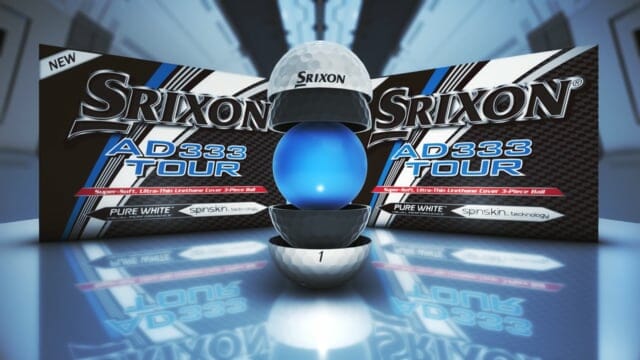